Kirsten Lepore is one of the most talented people I’ve encountered on the Internet. Her animation “Bottle” earned her accolades from around the globe, and Creativity Online named her one of the most influential creatives in 2011. Originally from New Jersey, she moved out west to attend CalArts and is currently finishing her MFA thesis film there.

She’s put together an amazing guest post for Booooooom that will go up later this week, so I thought it would be nice for you to get to know her a little bit! 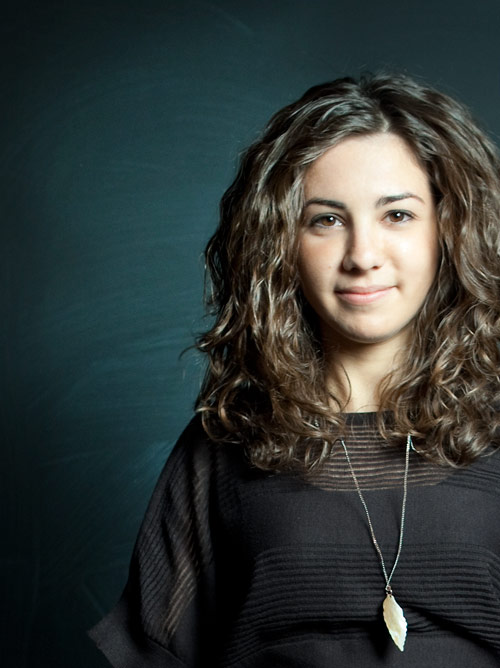 Jeff Hamada: I thought maybe we could both describe where we are so everyone reading along can imagine us and feel like they’re right here too.

I’m sitting in my apartment, in a part of Vancouver called Mt. Pleasant.  It’s so hot that I’ve actually got two fans facing me, one directly behind the other.  I’m hoping that the closer one speed boosts air directly to my face, like the arrows in Mario Kart.

Kirsten Lepore: I’m sitting at my desk in my room, in a part of Los Angeles called Echo Park.  It’s 3:18 pm but it’s also super hot here, and I’m sitting directly below my ceiling fan which is making the sweatiness bearable.  I’m listening to the new Jessie Ware album and my fingers smell like the red peppers I just roasted and jarred in garlic oil.

JH: “Booty Clap” is the closest you’ve come to making a music video, are you interested in that at all?  Is there a musician you’d be interested in collaborating with?

KL: I’m totally interested in doing music videos, in fact that’s where I draw a lot of inspiration from.  I end up watching wayyyy more music videos than animated films.  I grew up as a musician too, so the careful pairing of visuals to music has always been captivating to me.  I’m hoping to get more into music videos within the next few years (live action or animated).  There are tons of musicians I’d love to work with — I think I’d just have to be into the track.  But in terms of dream bands, I’ve always thought it would be the coolest to do a video for The Knife… or maybe a huge hip-hop artist.

JH: I’ve always wanted there to be a video for “Colouring of Pigeons”.  It was part of The Knife’s soundtrack for a dreadful experimental opera that didn’t come close to doing the music justice.  It has your name written all over it!  It would be amazing as an experimental stop-motion animation.

KL: Oh man, it’s soooo weird that you say that because that song was actually one of the biggest inspirations for my thesis film.  I think the song is such a masterpiece — I would listen to it obsessively on my drives back from Frazier Mountain Park after shooting the snow scenes for “Bottle” and it sparked some of the initial visuals for the next film.  I would get so excited envisioning what I could do to “Colouring of Pigeons” that I didn’t even want to finish “Bottle”, I just wanted to work on the new film.

JH: It was meant to be!  Are you still working on it?

KL: I’m still putting the finishing touches on my thesis film (a 10-min stop-motion short) and hoping to release it before the end of the year.

JH: I’m really excited to see it.  10 minutes isn’t long for a short film but for a stop-motion it’s an eternity!  Have you always been a patient person, or has working on stop-motions changed your personality at all?  I could see it being really meditative.

KL: I think there are definitely personality types that gravitate towards stop-motion more than others.  I’d say most of the stop-motion animators I know are innately pretty laid-back, easy-going people, myself included.  The medium can be so extremely frustrating and tedious that I don’t know how anyone could do it without extreme patience, and a lot of time on their hands.  I suppose different parts of the process can be meditative, but I feel that I’m not so much relaxed when doing it, but more in a focus trance.  Hours fly by. 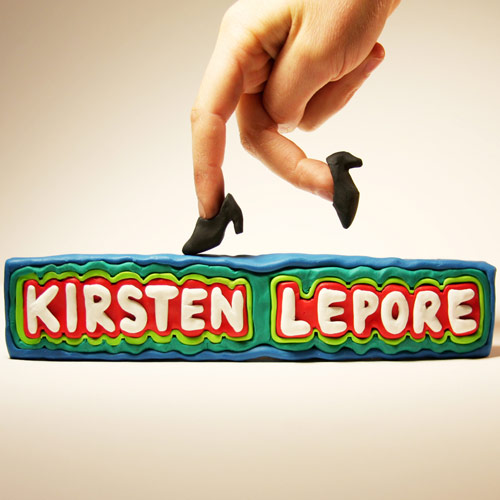 JH: Have you ever felt like the constant repetition might actually drive you insane?  Like that scene in “The Aviator” when DiCaprio says “show me all the blueprints” a thousand times!  I had to cover my ears in the theatre because I actually felt the film unlocking something in my brain that I might not be able to recover from.  Maybe you’re unaffected by it? Richard Williams spent 28 years hand-drawing “The Thief and the Cobbler” and he didn’t go crazy.  Or maybe he did?

KL: I think if I were hand-drawing the same things for years I might start to go a little cuckoo, but other than the repetitive nature of photographing all the time, I think there’s enough variation, tactility, and brain racking involved while animating to keep it fresh.  (But then again maybe I’m crazy?)

JH: Creativity named you one of the 50 most influential creatives in 2011 after your film “Bottle” kind of took over the entire internet.  Your name is now synonymous with stop-motion animation.  Do you feel like you’ve found your calling, or is this just one way of expressing yourself for the time being?

KL: I feel that I’m mainly associated with stop-motion specifically, which I have no qualms about.  Although I do feel the latter – I’ve just had a ton of ideas in recent years that required a stop-motion treatment, since it was integral to the story in some way.  But I’m definitely not married to the medium.  I love animating in Flash from time to time (relaxing compared to stop-motion), and I’ve been getting more and more live action ideas lately.  We’ll see if I can work up the courage to “go there.”

JH: Your Tumblr is one of very few that I follow, I love it.  You posted this gif awhile back asking about the source, and I think I watched it for three minutes straight.  So funny.  I don’t know if someone’s already showed you but here’s the original clip, it’s an ad for some shake.  The gif is just so much better.

KL: Thanks so much!  I never know if any of the posts will be interesting to anyone else, but they’re all things I absolutely love.  That gif is THE BEST!  But you’re right, the gif is much better than the real commercial.

JH: It would be cool if there was a comic where every panel was an animated gif.  I’m sure someone has done this, I’ve just never seen it.

KL: I saw this gorgeous one last year!

JH: Wow, yes!  That’s exactly the kind of thing I was imagining! 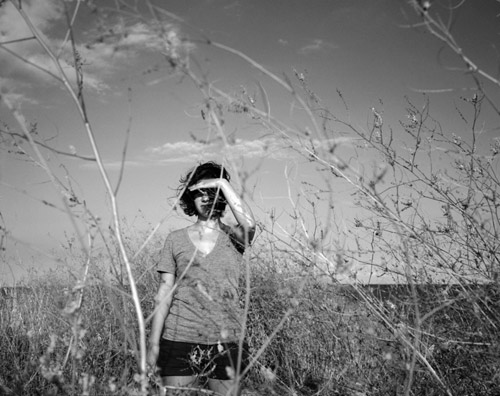 JH: Are any of your closest friends into making films? I ask because most of my closest friends are not artists.  Sometimes I think I’m an anomaly here, but I know you made “Bottle” on your own, and your family helps out with music and stuff.

KL: It wasn’t this way when I was living in New Jersey or during undergrad in Baltimore, but since moving to the LA area I feel like most of my friends are involved in film to some degree.  It’s been incredibly inspiring to be surrounded by a supportive filmmaking community, and I feel so lucky.

However, I still pretty much make my films alone.  I’ve struggled with the question of whether or not that’s a bad thing, but I do know that it’s much more comfortable for me when I can call all the shots and make everything exactly as I envision it.  And since I grew up a musician, I’m hypercritical about sound and music in my own films, so I like to work with my sisters on music when I can since we were raised with very similar musical sensibilities.

JH: I like that there is no music in “Bottle”, it really made the characters feel more alive because you could hear every little eye blink. I think people are quick to put music over top of everything (especially musicians).

KL: Yeah, that’s exactly how I feel.  It was a very intentional choice not to use any music in “Bottle”. Not only did I want people to be able to better take in the sound design and ambiance, but I felt that adding music would be too emotionally persuasive to an audience.  I didn’t want to manipulate people’s feelings with some sappy soundtrack, but rather have the whole thing feel more true to life and make the idea of moving lumps of sand and snow more believable.  Music often takes me out of the experience with a lot of other short animations I’ve seen.  I’ve never quite understood why most animators feel compelled to include music, as it can be very distracting.

JH: I know you’re a fan of Jim Henson. “Labyrinth” is one of my favourite films, and I often find myself describing the scene with the caterpillar where Jennifer Connelly goes inside the wall (usually I’m describing it to someone who doesn’t care at all).  There’s also a scene in his short film “Time Piece” where a girl does a striptease and until she is a skeleton.  I don’t know why but I think about these two scenes a lot.  Are there any film scenes that have stuck in your mind?

KL: Jim Henson is so genius!  One of the greats of our era.  I think about a lot of short films probably more than scenes from features.  For instance, I’ve always been floored by PES’ concept for “Western Spaghetti”.  I love that it’s so accessible, yet not at all a conventional narrative.  My mind often goes back to that when I get too hung up on traditional methods of storytelling, which can be pretty boring. I’m a big fan of anything that’s experimental, while still retaining accessibility.

Also, sometimes I think about this.

JH: Haha! Youtube needs a loop button just for the sake of this video.  Maybe we can finish this up with some sort of truth that you’ve discovered or a revelation that you’ve had making these films (could be big or small).

KL: That previous link is pretty much a revelation.  But besides that,  I’d say the biggest things I’ve learned have been 1) the power of story/concept and 2) the importance of follow-through.  Visual inconsistencies or bad animation are easily forgivable if the piece succeeds conceptually.  This revelation isn’t anything that new, though.

I think the more recent revelation for me was the discovery that most people start things without ever finishing them, and I’ve always felt that if you’re going to put hours and hours into something, you might as well finish it or else all those hours spent were in vain.  Even if you were in a different place when you started, or think it “sucks,” just finish it.  What’s the worst that could happen?  I freaked out halfway through both “Sweet Dreams” and “Bottle” and almost abandoned them before I even started shooting.  If I had, I’m fairly certain I wouldn’t be doing this interview, or even film for that matter.

Pretty much every incredible filmmaker and artist I know is full of self-doubt and thinks their work is (in the words of my British animator friends) “a bit crap”.  That attitude is part of the process, and that’s how they push themselves to do great things.  But first they have to push themselves – they have to follow through, or there would be nothing to show.  With that being said, my last piece of advice is that you shouldn’t necessarily trust any of my advice because I just disproved both of my points by posting that raving ducks link…