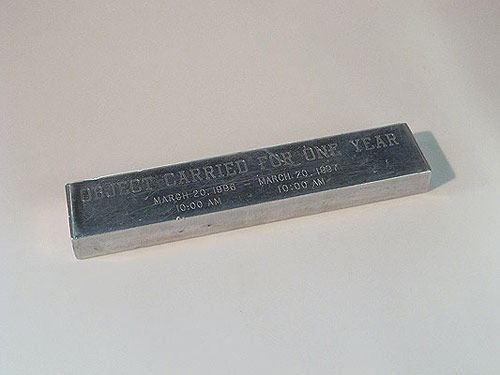 “Object Carried For One Year” by Kelly Mark. I recently found this text by another artist whose work I love, Micah Lexier. I think he describes her genius better than any small collection of images could.

“Kelly Mark Made This”
By Micah Lexier

I have the unique distinction – or so Kelly Mark claims – of being the very first person to have purchased her work. One day in 1997 Christina Ritchie and I drove out to Dundas, Ontario to do a studio visit with her. This was my first meeting with Kelly – Christina had met her several years before in Halfiax when she was a student at NSCAD. I was blown away by everything that Kelly showed us that day and I felt deeply connected to the kind of work she was making. At one point during the visit Kelly pulled a small, engraved block of aluminium out of her pocket to show us. It was a work in progress called Object Carried For One Year – a simple rectangular block of aluminium that Kelly had been carrying in her pocket for almost an entire year. It was the perfect object. It was small but made of a very durable material. It was a simple geometric shape but it was subtlely marked up with scratches that bore the tale of having been carried around. It was solid but light. It was everything I valued in an object and I fell in love with it immediately. I was overcome with the feeling that I had to have that object – that it belonged with me – and right there and then I asked Kelly if she would consider selling it to me. She said that the year was not yet up, but when it was, she would let me buy it. A little while later I got a call from Kelly stating that the price would be $1,200. She explained that the price represented $100 for each month of the work’s gestation. It was a lot of money for me at the time but I felt it was fair and I loved her pricing logic. It became the first of three works by Kelly Mark that I own.

The second work that came to live with me is a pencil drawing entitled Dixon (Until Series), named after the brand of pencil that Kelly used to create the drawing. It is one of three related works that Kelly made in 1997, each using and named after a different brand of pencil. On a large sheet of paper Kelly started the drawing – a dense depositing of graphite – roughly in the centre of the page and didn’t stop until all the pencil lead had been totally used up. What I love about this piece is its sense of equivalency. The work is both a drawing and a demonstration. We all know what a pencil looks like but by dispensing it all on a single page we are presented with its equivalent in drawing form – a rich, dense, beautifully unpretentious shape.

The third work, and most recent addition, is one that was completed in 2000, but I only saw for the first time in the fall of 2007 at a wonderful exhibition entitled Goin’ Postal, that Miles Collyer organized for Art Metropole. Again, the moment I saw it I knew it belonged with me. Goin’ Postal was an exhibition of works that had gone (or were made to go) through the postal system. Kelly exhibited a work entitled Boomerang, which consisted of a grouping of 114 empty envelopes displayed in a vitrine. To make the work, Kelly typed the work BOOMERANG on a letter-size piece of paper. She folded that piece of paper and placed it in a standard #10 (business) envelope. She put her name and address as both the sender and the receiver and mailed the letter to herself on August 26, 1998. At the time she started the project Kelly lived right beside a mailbox and so the work acknowledges (and celebrates) the fact that the starting point and the ending point of the letter’s journey were almost identical. When this first envelope arrived at her studio a few days later, she opened it, removed the letter, put it into a new envelope, and addressed it to herself. She then mailed this second envelope from the same mailbox as the first and when this envelope arrived she repeated the process. This continued until May 2000 when the 115th envelope never arrived at her studio -– thus bringing the work to a close. This is a classic Kelly Mark work – it is a simple idea based on something observed in daily life, religiously carried out until the work reaches its inevitable conclusion. One of my favourite aspects of this project is that the only two items that are missing are the very first thing she made (the letter with the word BOOMERANG typed on it) and the very last thing (the final envelope).

Besides collecting Kelly Mark’s work, I once made a Kelly Mark work. Every year the Ontario College of Art and Design hosts a fundraising event in which they send artists postcard-sized pieces of paper and ask them to make a work for the front of the card. The cards are exhibited anonymously so we are specifically asked not to sign the front. Only after the buyer purchases the work are they allowed to turn the card over and see who made it. A few years ago when OCAD sent me the cards I wrote “KELLY MARK MADE THIS” on the front and signed it with my name on the back. I told Kelly about this a little while ago and was relieved that she thought it was funny. I only hope the purchaser of the card felt the same way.