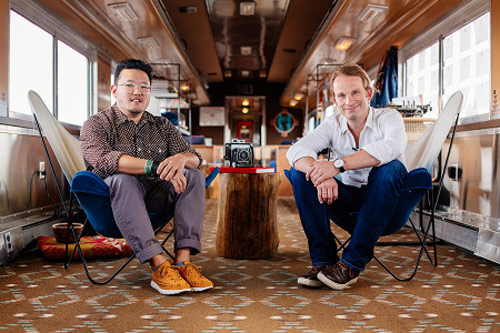 A few weeks ago I was brought out to Arizona by Hypebeast to be a part of Levi’s “Station to Station” project and got to chat with Florian “Doc” Kaps, the founder of The Impossible Project.

This is 10 mins of an hour long conversation we had (in really awkward chairs) and it kinda ends just as it’s getting to the good stuff, but it’s better than it being way too long.

Becoming friends with Doc was the highlight of the entire trip for me, when we shared ideas it was like our heads were two puzzle pieces interlocking. We will definitely be working on a project together in the future.

After we filmed this piece an amazing thing happened, we were having a beer together in another train car, and randomly Giorgio Moroder and Bruce Sudano sat down with us. Some may only recognize Giorgio from the recent Daft Punk album but to me he is the guy who scored Top Gun. What I didn’t realise is he is also the guy who made the first electronic live-to-digital album in 1979. He is Mr. Digital. Doc on the other hand, having devoted years of his life to saving Polaroid from destruction, is Mr. Analog.

The two Mr.’s got into one of the greatest arguments I’ve ever witnessed.

It was a friendly argument, but definitely an impassioned one. Digital versus analog, one-off experiences versus multiple viewings, which of these make life better? The Giorgio side of my brain wishes the conversation had been recorded but the Doc side of my brain enjoys the fact it wasn’t.

You can watch my conversation with Doc below!