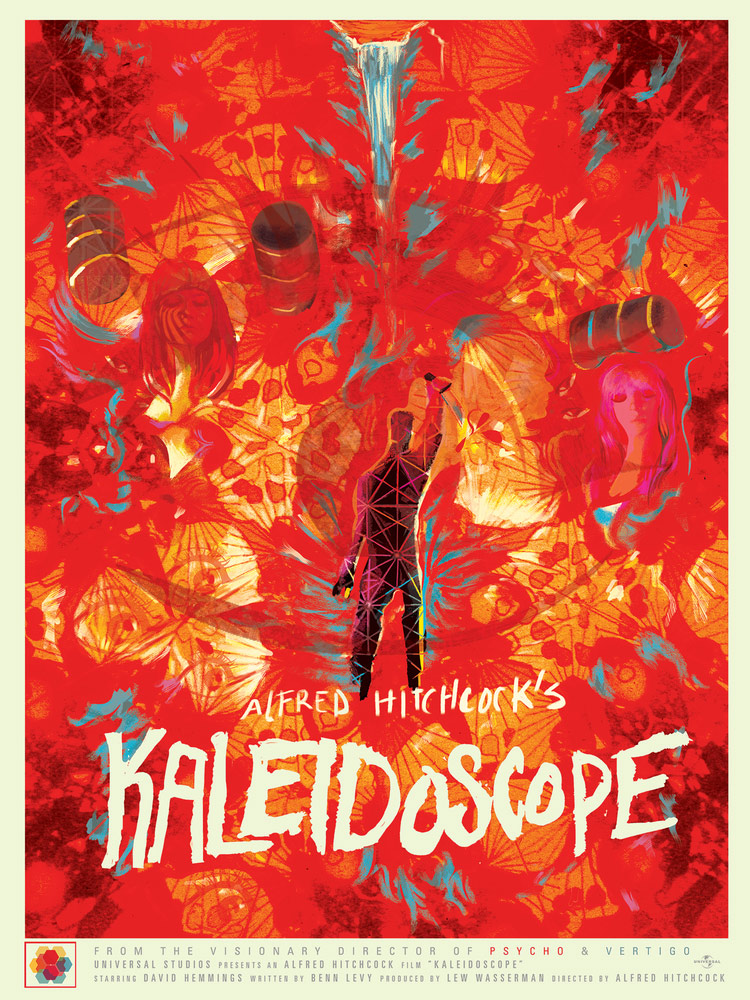 Los Angeles-based graphic artist Fernando Reza imagines a series of posters for films that iconic directors like Hitchcock, Lynch, and Kubrick, were unable to bring to life. Kaleidoscope for instance, would have been Alfred Hitchcock’s prequel to Shadow of a Doubt. Hitchcock had filmed silent test footage for the film, which was going to be told from the murderer’s perspective, and feature enough sex and violence that the studio ultimately persuaded him not to make it. You can actually watch test footage here.

See more film posters from this series below!

The following descriptions are taken from Fernando Reza’s website: 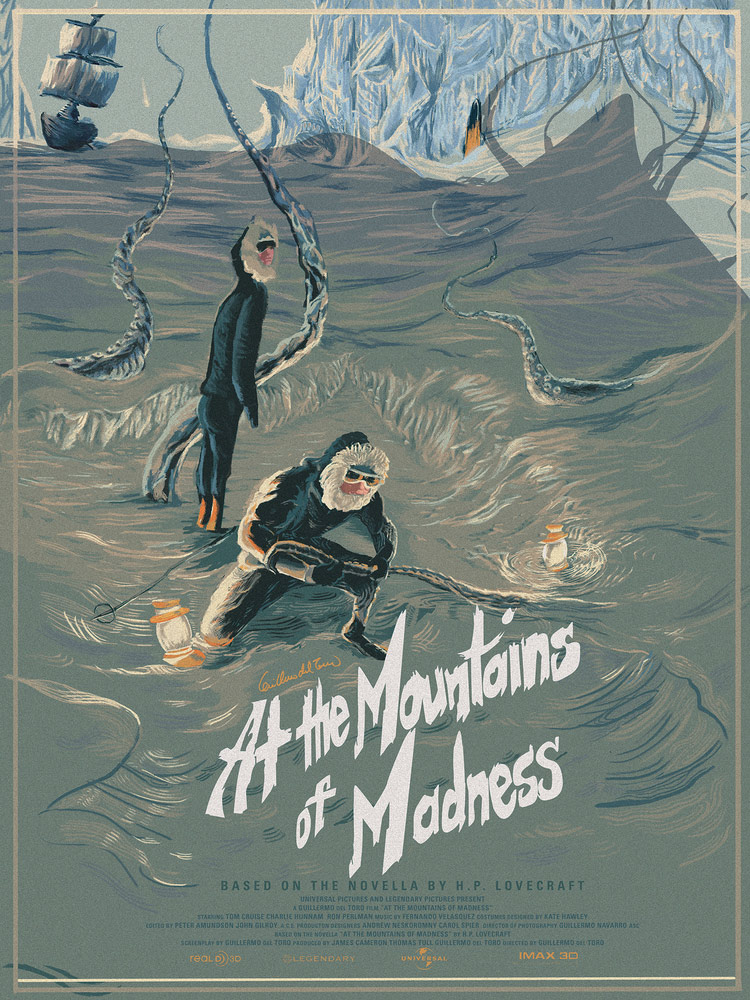 Guillermo Del Toro has demonstrated a passion for H.P. Lovecraft’s cosmic horror themes, creatures and settings his entire career. His creature effects in films like Pan’s Labyrinth show he has the imagination and creativity necessary to take on the massive task of brining Lovecraft’s indescribable horrors to the screen. At The Mountains of Madness would have seen Del Toro taking on one of Lovecraft’s most iconic novellas.

An expedition to Antarctica encounters evidence of ancient creatures. Through hieroglyphics and fossils the explorers discover the origins of the elder things, a cosmic race of creatures dating back millions of years. They encounter creatures too fantastic to describe, culminating in the survivors escaping by plane but not before one of the characters seeing something so horrific that it literally drives him insane.

Lovecraft’s story is so iconic that echoes of it have reverberated throughout not just pulp literature but the greater pop culture. In fact it’s this very fact that may have contributed to the demise of the project. In 2012 Ridley Scott produced his prequel to the Alien saga “Prometheus” and the similarities in setting and tone to Del Toro’s At The Mountains of Madness were a key factor in the film not being made. Additionally a disagreement on wether to go for a PG-13 or R rating seemed to further derail the films momentum. Del Toro’s production was massively expensive and the studio was hesitant to invest so much money in an R rated film of that scale. This in spite of the significant star power behind the film. Tom Cruise was cast as the lead, and James Cameron fresh off breaking his own all time box office record would serve as producer. Guillermo Del Toro went on to prove he’s more than comfortable creating on a scale just as epic as At The Mountains of Madness with his film Pacific Rim and as recently as 2014 he expressed interest in still doing the film though he has conceded his preference for an R rating. 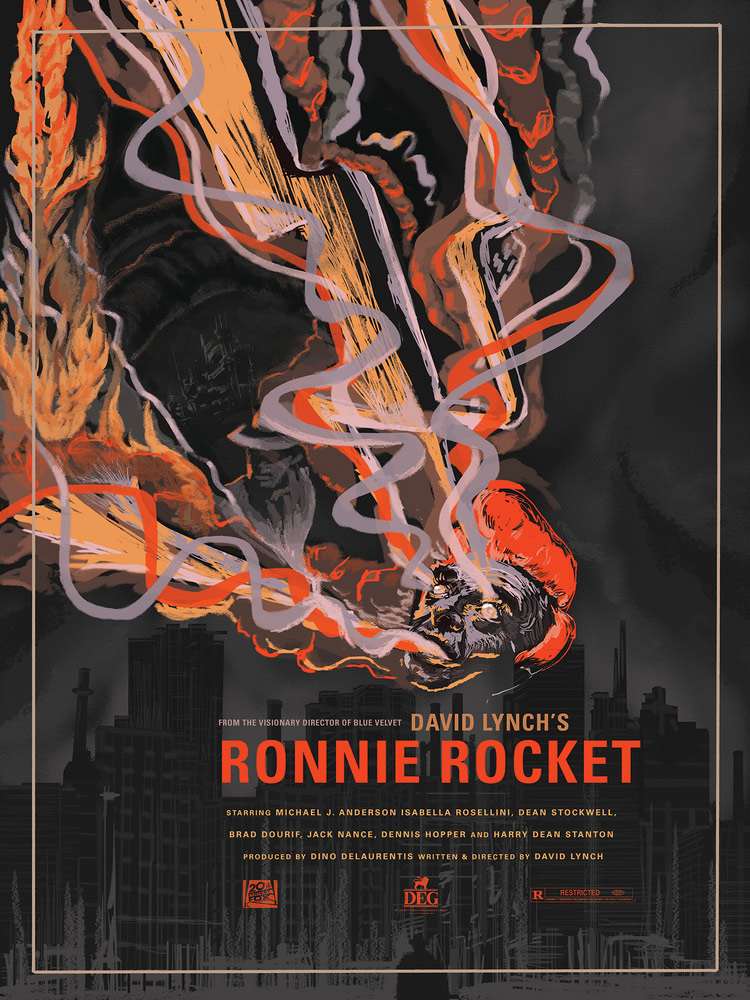 David Lynch originally intended Ronnie Rocket to be his follow up to his stunning debut Eraserhead which was quickly reaching cult status and acclaim as a midnight movie in Los Angeles & New York. Ronnie Rocket would expand on the bleak industrial dystopian theme and setting of Eraserhead while establishing new themes of identity, dream logic and experimentations with tone that would develop later in his career in films like Mulholland Drive Lost Highway and Blue Velvet.

The plot centers around two stories. A noir detective story about a man delving deeper and deeper into a nightmarish wire strewn industrial  city looking for the means to escape. As he gets closer and closer to the center of the city he encounters confusion everywhere and episodic encounters with the city’s disturbed inhabitants. He’s hunted by the donut men, a group of donut eating men with vague magic abilities who maintain order in the city. The donut men are part of a power structure under the city’s boss Hank Bartell who has reversed the city’s electricity in an effort to confuse and control his citizens.

Meanwhile concurrently we see the story of a severely deformed man who undergoes a surgery that turns him into a red pompadour donning  electricity sensitive young man named Ronnie Rocket. His creators decide to enroll him in high school where through happenstance he joins a rock band. The electric guitars and amplifiers affect Ronnie and cause him to shoot sparks from his body and convulse in such a way that appeals to the audience. His band wins a record contract and become huge stars but his promoter cares little for Ronnie’s well being and  increasingly dynamic shows start to wear him down.

The movie begins with the detective in a room with the disfigured man who will become Ronnie, who gives him a piece of paper with symbols on it. The stories converge again at the climax when Ronnie is dying on stage performing at his peak and the detective has reached the innermost place in the city and confronts Hank Bartell.

Lynch didn’t garner enough interest in Ronnie Rocket in 1978 to make it his follow up, instead he reached main stream appeal with The Elephant Man which he made for Mel brooks in 1980.

Ronnie Rocket would sit on the back burner for years until Lynch reached critical and box office acclaim with Blue Velvet in 1986. Dino De Laurenti had agreed to produce Lynch’s next film and David intended to make Ronnie Rocket. He rewrote the script, amongst other things adding the image of a two hundred foot tall wall of flames at the beginning of the film. He scouted locations and assembled a cast. Michael J. Anderson,  who would later on play the iconic “man from far away” in twin peaks, would be Ronnie and Lynch’s frequent collaborators Dennis Hopper, Isabella Rossellini, Brad Dourif, Harry Dean Stanton, Dean Stockwell and Jack Nance would round out the cast. The film would be shot in black and white with flourishes of color. Everything was set, De Laurenti’s involvement meant that Lynch would have access to Cinecitta Studios, famous for creating spectacular productions for films like Flash Gordon and the intricate sets of director Federico Fellini.

Unfortunately De Laurenti gambled much of his studios worth on a film /  publicity stunt where characters search for 3 of four hidden treasures. The fourth treasure which could actually be found by careful watching of the film and by purchasing Glad trash bags which had clues in it’s packaging as part of a cross promotional agreement. The movie didn’t make enough money to even cover the prize money and De Laurenti’s studio stopped production on all major project including Ronnie Rocket.

Lynch hasn’t made a film since 2006’s Inland Empire but with the return of his series Twin Peaks, there may still be hope for Ronnie Rocket. Lynch has expressed interest in making the film off and on for his entire career. 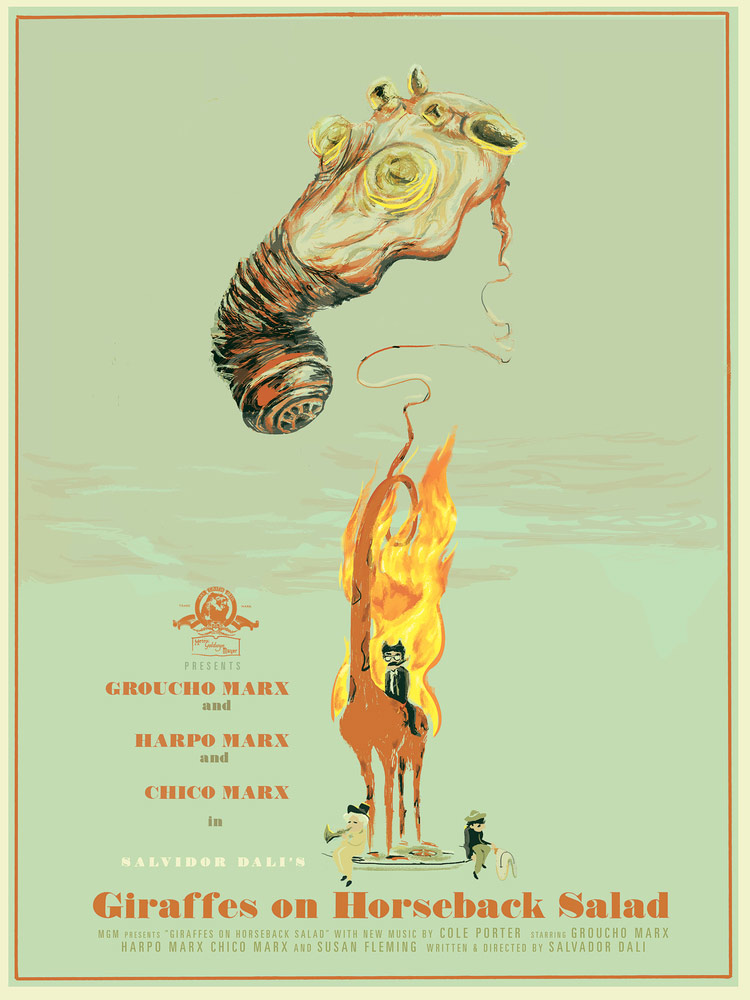 Surrealist painter Salvador Dali delved into film many times during his career. His films with fellow surrealist Luis Bunuel, Un Chien Andalou and L’Age d’or in the 1930’s were surrealist benchmarks and had enough social commentary in them to be condemned by the catholic church and images so shocking that in Paris the League of the Patriots a right wing group threw ink at the screens leading to violence in the theater.

It wouldn’t be until Impressions de la haute Mongolie in 1975 that Dali would finally direct a film himself for the first and only time.

But in 1937 Dali had intended to do just that. Giraffes on Horseback Salad would have been a collaboration between Dali and the Marx brothers. Dali greatly admired Harpo Marx and the two had developed a friendship with an intention on one day working together. The film would have followed a spanish Aristocrat played by Harpo in love with a woman who’s face the audience never sees. Throughout the film Dali intended to show “the continuous struggle between the imaginative life as depicted in the old myths and the practical and rational life of contemporary society.” The film would have been anarchic and absurd. Scenes included a horde of burning giraffes wearing gas masks, and Harpo catching dwarves with a net. A loosely plotted script was assembled by Dali but outside of Harpo the other Marx brothers had reservations about the project. Groucho didnt find the film funny. It’s unclear how far along the project actually got before being cancelled but without the enthusiasm of Groucho and Chico the film lacked the momentum to get very far past Dali’s imagination.

Years later another doomed production, Alejandro Jodorowsky’s Dune, lured Salvador Dali back to the movies, this time playing the mad emperor of the galaxy. One of his conditions was that his throne room include the flaming giraffes with gas masks from Giraffes on Horseback Salad. An image that he’d wanted to put on the screen dating back all the way to 1937. 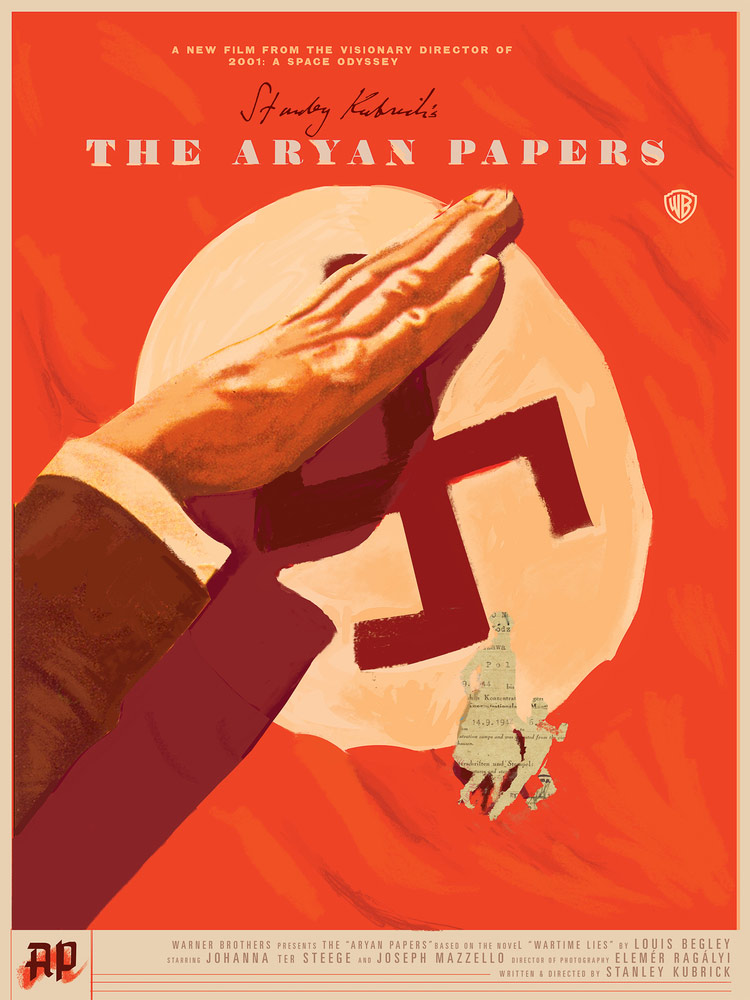 While Napoleon (which was highlighted earlier in our series) stands as Kubrick’s true unmade masterpiece, The Aryan Papers a project he envisioned for nearly 20 years was unmistakably a deeply personal project for Stanley Kubrick. Kubricks early intention was to hire Isaac Bashevis Singer to write an original screenplay which would try to show the breadth of the horrors of the holocaust from the perspective of an individual. Singer wasn’t keen on the idea so Kubrick, after taking a break to make Full Metal Jacket, instead decided to adapt Louis Begley’s book Wartime Lies. The story follows Tania and her nephew Maciak as they try their best to hide from the Nazis in the jewish ghettos during the Holocaust. Kubrick wittled down a list of actresses including Uma Thurman and Julia Roberts before deciding on Johanna ter Steege for the lead and Joseph Mazzello for the part of the nephew. As with all of Kubricks projects meticulous care was given to every aspect of the film. Test shots were done with Steege in costume and locations were scouted and vetted for historical accuracy. He compiled a huge archive of historical images as a visual guide and intended to film in Poland, the Czech Republic and Slovakia.

Kubrick’s wife Christiane has reported that a big part of the demise of the project was the effect the subject matter was having on Stanley himself. It has been reported that work on the film drove Kubrick into a depression. Additionally Kubrick’s friend Steven Spielberg was hard at work on his own holocaust picture Schindler’s List. Eventually Kubrick abandoned the project and focused on his other long time fascinations, A.I. another uncompleted project, and his long planned adaptation of Traumnovelle which would eventually become Eyes Wide Shut, Kubrick’s final film.