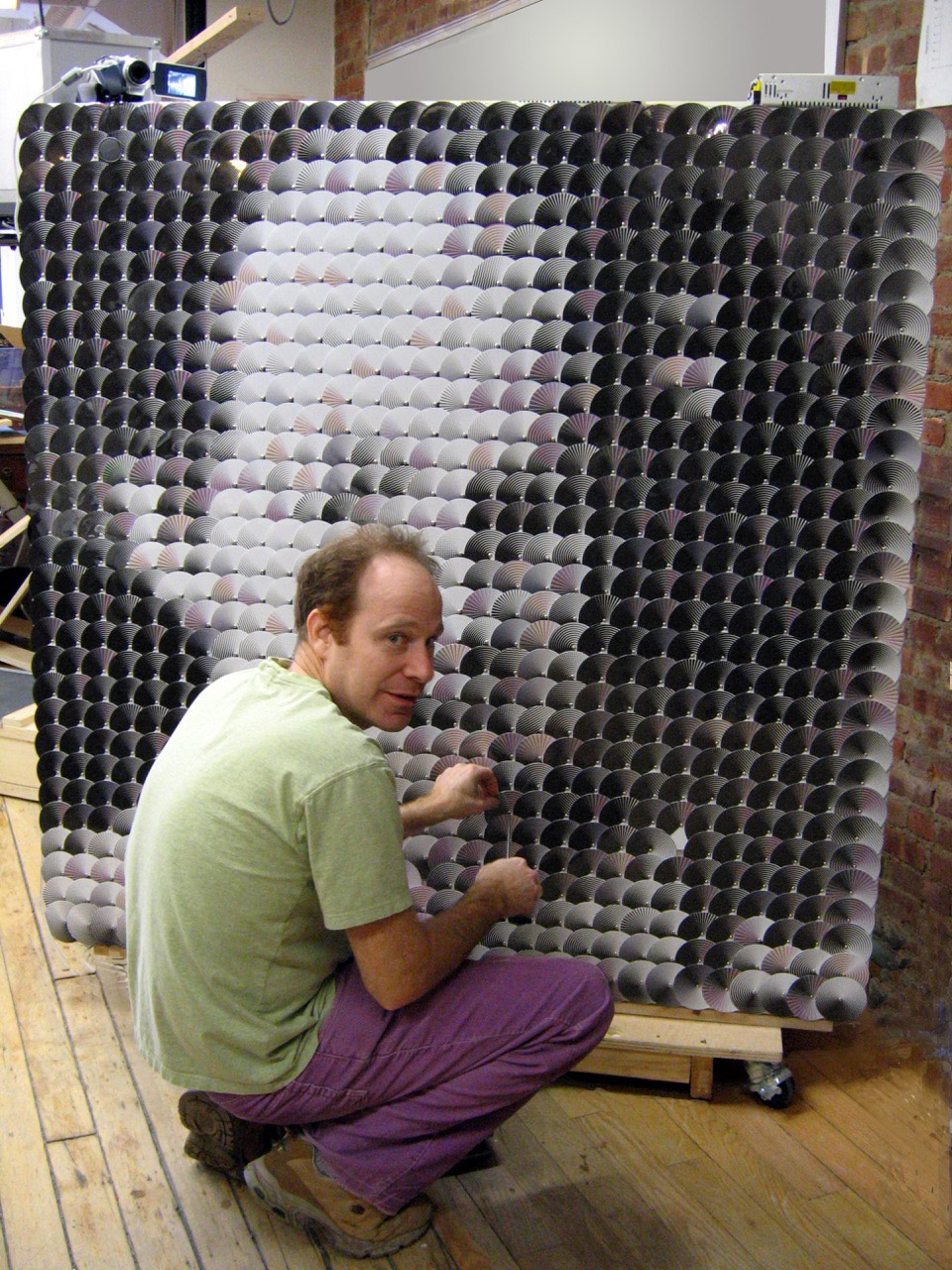 Daniel Rozin is an Associate Art Professor at ITP Tisch School of the Arts, NYU, and as an artist he is perhaps best known for his ongoing series of ‘mechanical mirrors’. I’ve been fascinated by his work for several years now so it was a treat to get to ask him some questions about the things he makes. Have a look at a video of some of his works as well as a short interview below.

Jeff Hamada: Since much of your work is about reflection, how about we start by having you describe yourself. Who are you?

Daniel Rozin: Professionally, I started as an industrial designer. After doing that for about 10 years I ended up at ITP (the Interactive Telecommunications Program at NYU). There I learned how to be creative with technology by means of programming and electronics. Once that happened I felt a huge surge of creativity; something about those tools was very right for me, and I felt I no longer wanted to work for clients. I started doing projects for my self, for my own self expression. Other people called it art, so after a while I came to terms with it, and now I consider myself an artist.

JH: I first saw your work in Israel at the Holon Design Museum back in 2011 as part of a fantastic show there called Decode. On that trip I also briefly visited Jerusalem, and Bezalel Academy, did you go there? Where did you get your education?

DR: Yes. I went to the Bezalel Academy of Art and Design for industrial design. It was a wonderful education and even today when all my projects are art projects, I still think like a designer and use skills I learned there

JH: How does a place like Jerusalem shapes a designer’s mind?

DR: Israel and Jerusalem are not a great place for design. It is a serious place with serious problems to solve; it doesn’t lend itself to light-hearted exploration. Even though Israel is known for its hi-tech and startup culture, most engineers get their experience in military fields which don’t necessarily put design, user, or beauty as the first priority.

JH: What was the genesis of your obsession with mirrors?

DR: I wasn’t aware of it initially. When I started doing art projects I used cameras as input, and only after someone pointed it to me that all my projects were in fact mirrors I started to be more explicit about my investigation into mirrors and reflection. Mirrors have the capacity to show us what we look like from the outside, which for me, is very different than the way I experience my being from the inside. That discrepancy intrigues me. 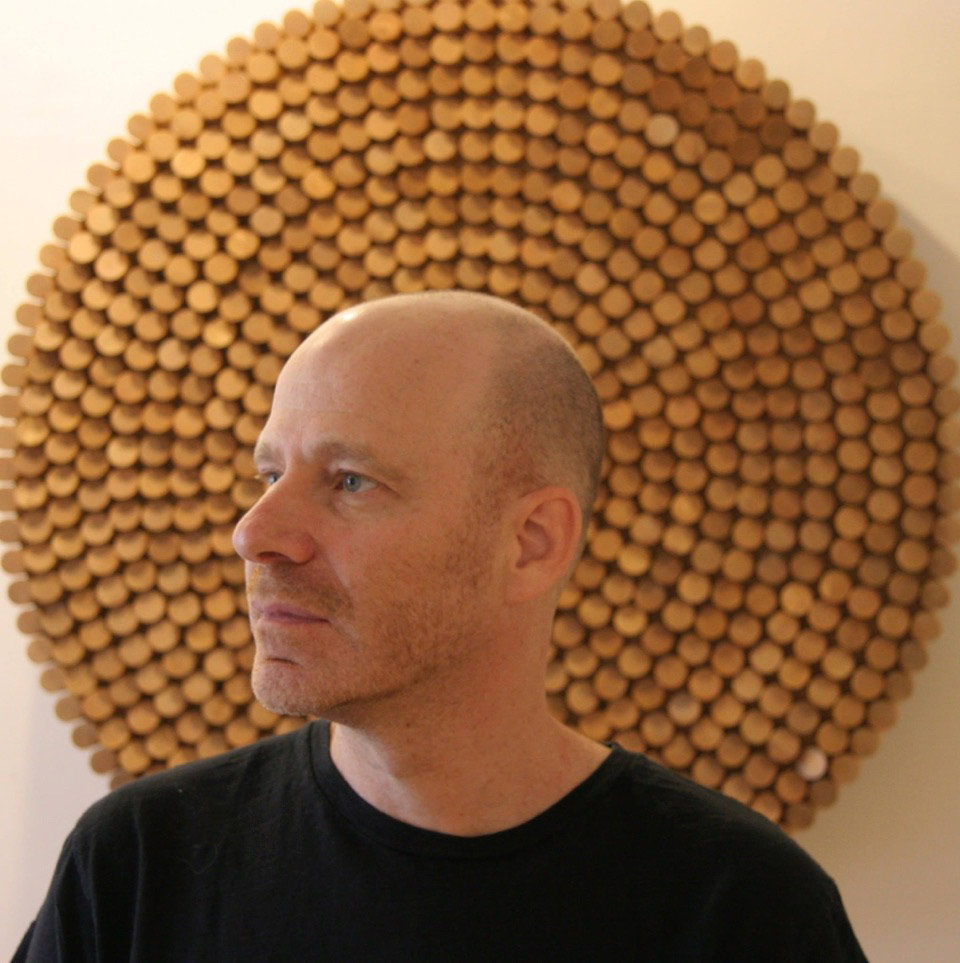 DR: The mirrors that I make are a very sorry excuse for a mirror. Real mirrors are amazing objects, they have the ability to display a different image to infinite observers at the same time. Trying to even calculate that would be infinite. I enjoy using real mirrors and have built a few pieces that are based on glass mirror. Technologically it is simple to create a mirror by attaching a camera to a display and letting people stand in front of it. That is the basis for all my pieces, the display portion of this is where I do my creative expression.

JH: There’s a real poetry and a playfulness to your work. The simplicity reminds me a lot of going to Science World as a kid, and playing in this one room where a flash would go off and it would capture your shadow on the wall. Like the imprint of your body would be left there for a few minutes before the next flash went off. I don’t know what it was about that experience but I still think about it.

DR: Thanks. Yes, I know that exhibit and love it. Nowadays we are exposed to a lot of technological wizardry and don’t think twice about it, in fact we have given up on trying to understand it. When you go to a movie and see a dinosaur fighting an alien you immediately say “they did it on the computer” as if that explains anything. Things that are digital and technological have become very opaque to us. I try to make technological devices that are simple to understand and rely on our intuition rather than defy it.

JH: Any top secret mirrors in the works?

DR: Not sure, last year I was working with soft materials like fur pompoms and plush toys. I really like that and would like to investigate further this intersection of mechanics and soft materials.

JH: Have you seen this? I like how it simultaneously presents two realities. Kind of like when you talked about this discrepancy between what you look like on the outside versus your experience of being you from the inside.

DR: I love optical illusions, and that one is outstanding. My pieces are often shown in museums as part of exhibitions. usually these are themed around technology, but sometimes around more interesting themes such as portraiture and optical illusion . I love being part of optical illusion exhibitions. The duality of having two types of reality in one object is something I try to pack into most of my pieces. usually there is the meta observation (you see yourself reflected in the piece) but then as you get closer, a second set of information and awareness arises, this is where the details live, the material and the subtlety of the motion.

JH: What’s something you’ve discovered about yourself in the last year or so? Could be a large or very small epiphany.

DR: I like cilantro! I grew up telling myself I hate cilantro but suddenly I love it. who knew?