Since the earliest days of Booooooom, our pal Zoltron over at Sticker Robot has done all sorts of printing for us and been a big supporter of what we do. He just printed up some new stickers for us and we’ve put a Big Sticker Pack in our shop. If you’re a member, you can snag a pack for FREE (just cover shipping) using the code we posted on our Slack or email us for it.

Zoltron’s always been a bit of a mysterious character so I thought it would be fun to do a little interview with him. So, without further ado, allow me to introduce the enigmatic king of stickers himself, Zoltron.

Jeff Hamada: When I started Booooooom in 2008 you’d already been making art for 15 years, how has your motivation to create changed over time? Or has it?

Zoltron: I remember randomly coming across Booooooom around that time. Back then, everyone seemed to be recycling the same content over and over, mainly showcasing a handful of artists. It really was (and still is) such a refreshing approach to exposing new art and photography from so many talented, emerging and unknown artists that most of us have ever seen before.

I think my motivation to create is still the same. It’s something that I truly love, so I just keep doing it. These days it’s probably less about paying the bills than it used to be. 15 years ago I was hustling to pay rent and taking on all sorts of design work. I was looking for gigs, pursuing random opportunities, trying to get my work in shows, magazines, etc. and even though I had been at it for a while and found some success, I was still really trying to get a foothold. At that time, I primarily worked doing design in the music industry, building websites, doing band merch and CD design.

It was around 2008 that I stopped taking any design work and just focused on my own thing, mainly screen printing, making art and prints and doing gig posters for bands I love. It’s still a hustle, but there’s been a good response and I have some rad collectors who support me so I can continue churning out work and I can finally afford to stock my fridge with La Croix.

JH: What were you like as a kid? What kinds of stuff were you into? Did you grow up in SF?

Z: I was born in San Francisco, but was raised up north a few clicks in the redwoods towards the coast. Both of may parents were artists and most of their friends were artists too, so I was raised in a very creative household. I had lots of brothers and sisters and I was the youngest by quite a few years. My older brothers were classic 70s teenagers, long hair, jean jackets, incense, flocked velvet, day-glo posters and lava lamps. Hot girlfriends with satin pants and feathered hair. Led Zeppelin on the 8 track… My sister was a little more punk rock or maybe emo, I dunno. I thought she was so cool. I still think she is. I caught lizards and played in the poison oak, hung out with friends, got fed hash brownies by my brothers, played sports and put on “art shows” for my parents dinner parties, selling my shitty drawings for a quarter a piece — my first entrepreneurial roots maybe.

JH: I read that you originally started Sticker Robot after a local printer refused to print some of your sticker designs due to them maybe not aligning with their politics. Can you talk a little bit about that?

Z: Ha, Yes! That ended up being quite the fortuitous rejection. It was November 2001, just after the tragic events of 9/11 when everyone was waving their American flags. I made a sticker of a grimacing George Bush and sent it to a sticker printer in Los Angeles. The owner was a devout republican and refused to print something so Anti-American and unpatriotic. I argued that dissent is as patriotic as it gets and that’s why America is so goddamn great. We can speak up against those in power without getting thrown in the gulag, we can dissent without being flogged. So on one level, what is more patriotic than celebrating those rights? We actually had a civil discussion about it. I pleaded my case and he appreciated the logic, but in the end he still denied my sticker. So we decided to start our own sticker printing company, founded on the cornerstone of Free Speech. Sticker Robot! Adhesive Free Speech for a penny a square inch…

JH: With everything you have going on, you’ve somehow also found the time to curate and manage a hand printed silkscreen poster by a different artist for nearly every Primus show for the past 10 years (over 300), what has that experience been like?

Z: It’s a trip. The silkscreen poster scene is really in a renaissance. So many artists and bands and galleries and shops and printers are turning out amazing prints and finding a community of collectors who love and appreciate the medium. I think in this digital age, people really respond well to the hand-printed, tactile feel of something tangible, like beautifully printed art on paper. We find the same thing at Sticker Robot where we focus on silkscreen printed stickers as opposed to push-button digital printing. It’s tedious and laborious, stretching screens, mixing ink, running shifts, but the quality difference is day and night and people who understand the medium truly appreciate it.

Z: Anyways, I handled all the creative for Primus from 1996 until about 2008. Web, graphics, posters, album design, packaging, etc. When they reformed to tour in 2009, I pitched the idea to do a custom, show-specific, hand-printed, limited edition, artist signed and numbered series of prints, a new poster for each and every show, designed by a different artist and printed by various printers across the country, then shipped to each venue, one night after the other. It was a logistical nightmare and they thought I was batshit crazy, but we tried it out for some local gigs and the response was crazy. So we started doing it for more shows and we’ve somehow managed to make a new poster for just about every show they’ve played in the last 9 years. 325 posters to date. It’s been an ambitious undertaking and I emotionally ebb and flow between the highs of being really excited and inspired, collaborating with so many great artists, to the lows of wondering how the hell I ended up here and when am I going to tell everyone to fuck off? But I do love working with artists and creating art that accompanies music, so for the most part it’s been a very rewarding experience.

JH: At this point in your life, what are you most proud of?

Z: I want to say my moustache, but I don’t have one, so I’ll go with my beloved kids. 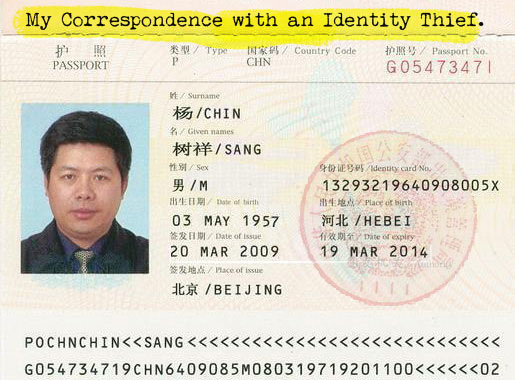 JH: I love your correspondence with the Identity Thief on your website. It reminded me of the story where the guy tracked his stolen iPhone to China and ended up becoming good friends with the thief (read that here). Do you still do these kinds of things? Answer scam emails?

Z: I read that story, it was great. Kinda like Sarah Silverman’s Twitter Troll Response. Choose love… see what happens. In my case, I chose to troll the identity thief. Engaging a scam artist is fun. Good ol’ Chin Sang Chin, my Chinese benefactor. I miss him. I was actually on vacation during that correspondence, taking a break from art and work, so it became an excellent creative outlet for me. I carefully crafted my replies and timed my email responses so he would get back to me right away. He sort of accompanied me in my travels and I genuinely looked forward to his emails. I strung him along as long as I could and it lasted the whole trip, but eventually I wore him down. Sadly, I never started my ingenious Car Pet® business and I’m still waiting for my 21 million dollars.

As for if I still do those kinds of things, honestly, I don’t normally engage on the Internet. I’ll sometimes start a dialog by posting something, maybe slightly confrontational or even very confrontational and then let everyone else discuss it. I feel pretty strongly that you’re not gonna change someone’s mind with an adversarial response to their political facebook tirade, but I do like to start a good debate, then watch from the sidelines. So that correspondence with the identity thief was kind of a random (yet very fun) one-off campaign.

JH: What’s something you’d like to accomplish this year?

Z: Getting Jeff to interview me for Booooooom is pretty great. I’ve been hiding in the shadows since 2008, practicing my responses…

JH: You can take the rest of the year off!

Z: We’ve been working on a new Sticker Robot backend for over a year, totally redoing the entire system from scratch. If we can finally get that done, I’ll be elated. Otherwise I’d like to find some untapped inspiration and focus on a new body of work for a solo show I have coming up next year.

JH: What about one thing you’d like to accomplish in your lifetime?

Z: I should say world peace or end famine, but to be honest, I’ve always wanted to write a screenplay for a film. When I was in my 20s, I must have started four or five, creatively fueled by caffeine and THC, which meant a bunch of fragmented scenes which I thought were genius at the time, but I’m pretty sure I was just really stoned. It’s still something I’d love to do.