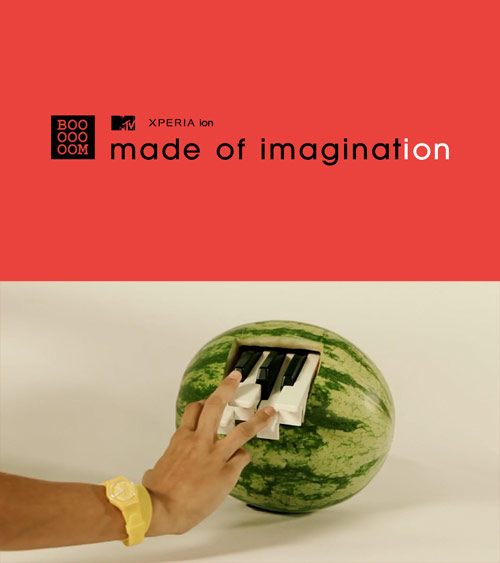 As our “Made of Imagination” project with MTV and Sony Xperia comes to a close I just want to make sure I say thank you to every single one of you for getting involved!

It’s kinda silly to only pick two winners but that’s how many prize packs I get to give away. I wanted to reward entrants who created something specifically for this project instead of submitting something they’d previously made, and both of these submissions went above and beyond with wonderful performance videos.

Congratulations to Joel Zuercher (Los Angeles, California) and Cristian Martínez (Buenos Aires, Argentina), you have both won Sony Xperia phones as well as some Booooooom goodies!

See both submissions below:

Joel Zuercher’s submission is a box with spindles and a hand crank and two guitar wires strung across the front.

Cristian Martínez’s submission is a modified toy affixed with metal sponges, car antennas, and crocodiles clips. He is accompanied by his friend Isis Abigail on an oscillator, using herself and a plant as variable resistor. I love how Isis really goes off near the end.

I gotta acknowledge Simone Shin’s sewn turntables, Cara Stewart’s broom phonograph, and of course the fast food performance by Jessica and Aurélien! These were also standouts! If you haven’t done so already, take a look at all the instruments:

Thanks for making this such a fun project you guys! Any Booooooom goodies I promised people will be sent next week!