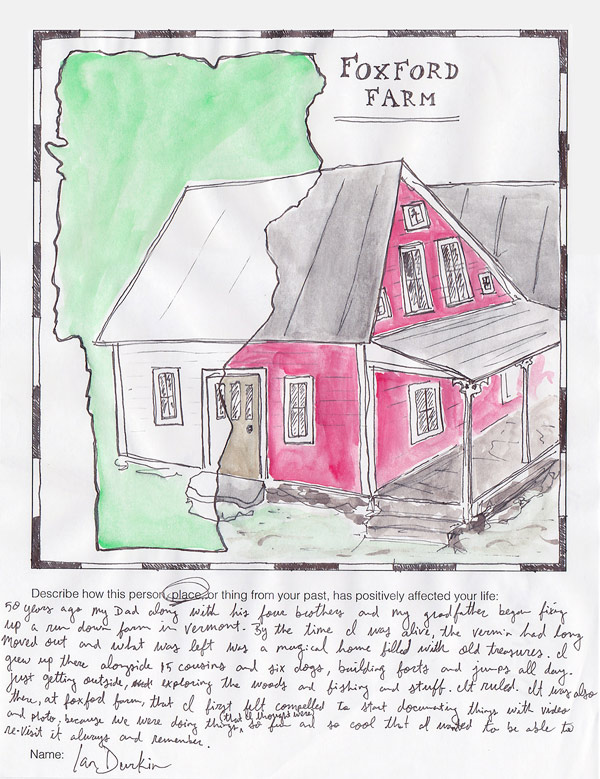 This drawing above is a submission to our Drawing On The Past project, by filmmaker/photographer Ian Durkin. He wrote:

“50 years ago my dad along with his four brothers and my grandfather began fixing up a run down farm in Vermont. By the time I was alive, the vermin had long moved out and what was left was a magical home filled with old treasures. I grew up there alongside 15 cousins and six dogs, building forts and jumps all day. Just getting outside, exploring the woods and fishing and stuff. It ruled. It was also there, at Foxford Farm, that I first felt compelled to start documenting things with video and photo because we were doing things that I thought were so fun and so cool that I wanted to be able to re-visit it always and remember.”

Jeff Hamada: I’m writing to you from my Vancouver apartment, I’m listening to “What’s The Altitude” by Cut Chemist. Can you describe where you are right now?

Ian Durkin: It’s 10:53 PM and my window fan is my prized possession on this hot Brooklyn night. I received the Lewis “L’amour” album in the mail today, which I’m listening to in my apartment. I’ve been trying to track down a copy for years now and to my delight, a re-release arrived unscathed at my doorstep by way of Washington.

ID: It’s the kind of last name that without fail becomes one’s only name. Perhaps it rolls off the tongue easier than “Ian”, but every time I meet someone, it seems that my first name gets dropped fast. I believe that it’s an Irish name.

JH: The same thing happens to me with my last name actually! What’s your favourite thing about living in New York?

ID: I’ve made some great friends in New York, which is my favorite part. There’s also always something interesting to do, which is amazing, but also tricky when you’re trying to buckle down and get work done.

JH: Is working at Vimeo as cool as it is in my mind? In my mind, it is the best.

ID: It’s pretty great. I’ve been there for over three years now and I’ve yet to be bummed to head into work in the morning. You need to come visit sometime and I’ll show you around!

JH: I’d love that! How often are you even at home? You strike me as someone always heading out on some wild adventure; how long till you move to a cabin in the wilderness?

ID: I’m at home a fair amount. I do like to get out and go on trips, but hanging in New York is super fun as well. I don’t think I’ll be living here forever though, so that cabin in the wilderness, or just a smaller town is always on my mind if there is a means to get there and a way to make it sustainable.

JH: I haven’t really skated at all since I annihilated my ankle on a rail (full disclosure: the smallest rail in the entire universe) many years ago. I still snowboard and stuff but there’s something about even watching skateboarding that makes me want to make things. There’s like a primal energy to it; I love watching skate videos while I work or draw. Can you talk a little bit about what skateboarding means to you.

ID: I’ve annihilated my ankle on smalls rails too. Really classic move. Skateboarding to me is just a fun thing to do with friends before and after work. It’s also an excellent vehicle to take you to odd parts of the city that most wouldn’t find cool and to meet new people.

ID: I have a lot of favorites. “Beginners” just popped into my mind. I liked that one a bunch. I really loved the “No complies, Wallrides and Shuvits” Polar web video that Pontus Alv made a few years ago. I return to that often. And I grew up watching a lot of Disney Channel original movies. So if we were flipping through the channels and “Motocrossed”, “Jonny Tsunami” or “Brink” were playing, I’d be pretty jazzed.

JH: I love “Beginners”, it’s the only movie I’ve ever watched twice back to back on an airplane (maybe partially because I’m in love with Melanie Laurent). I also posted that Polar video on Booooooom, it’s so good! Okay, what song do you want played at your funeral?

ID: Anything with a live horn band. Horns are so joyous, and I think it would be a nice touch for the occasion. I suppose I should befriend some horn players to make sure this happens.

ID: By the end of the year, I hope to put out at least a couple more short videos that I’m proud of as well as take a lot more photographs. By the end of my life, I hope to own land and a house. The idea of having a home to work on and grow a family in is really appealing to me. 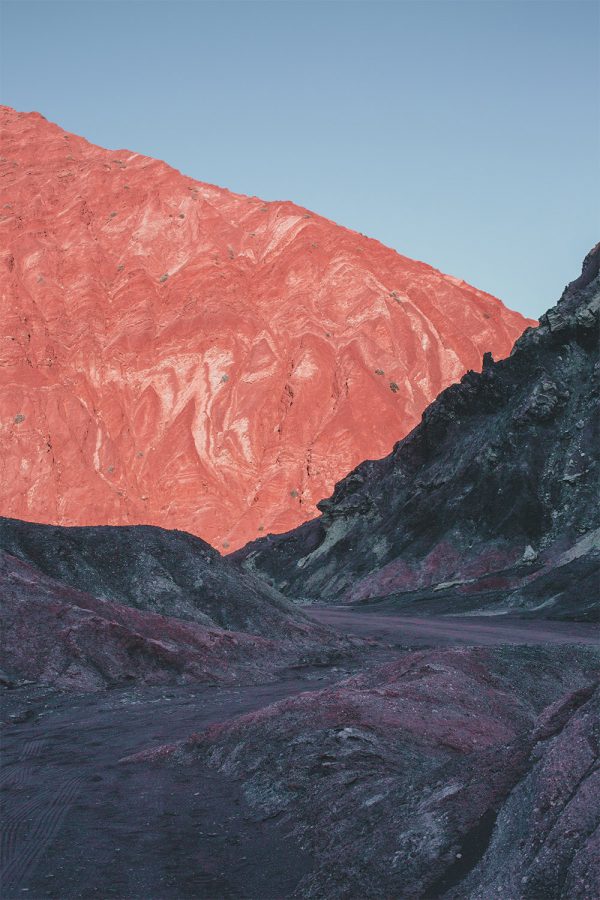 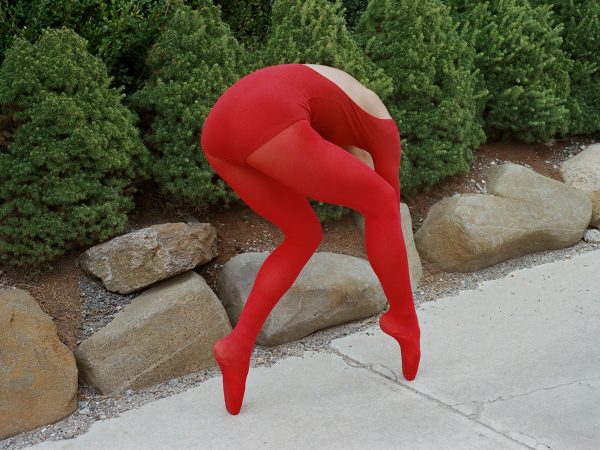