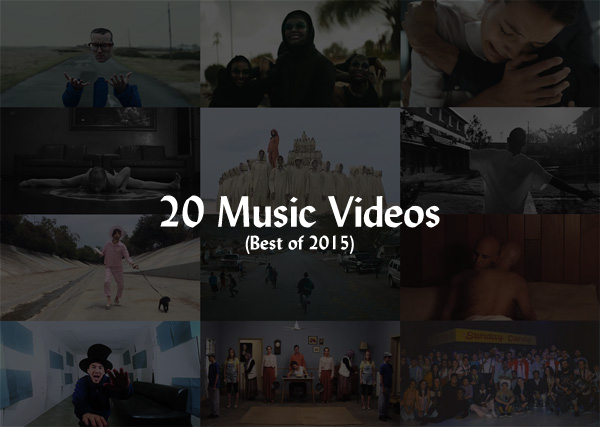 Here’s my picks for the 20 best, most creative, funny, beautiful, memorable videos of 2015. I don’t believe any other sites chose the video I picked for Video of the Year. It took me awhile to edit this down from a list I had of 50 or so videos. Hope you find a couple that you overlooked this year, and if you disagree with my list, let me what your top 20 is in the comments. FKA Twigs is not on this list so let the disagreements begin.

Watch all the videos below!

Eternal Sunshine vibes in this beauty directed by Shynola! Love the little CG touches here and there. Surprised it didn’t get more love online, but then again many of the videos on this list are nowhere to be found on other sites best of lists.

These guys remade Freak on a Leash! This whole video is so specific, and dumb, and amazing. I’m sure half the people who read this site won’t even remember Korn (or Sugar Ray) but maybe you can still appreciate the fun zero budg vibes here. It wouldn’t be a Booooooom list without a video like this!

I have a soft spot for low budget videos and this one does a lot with very little. Turns out all you need to make a striking video is a bunch of shirtless CG characters.

This was the riskiest video I saw this year. Black and white, very little movement, two talking heads, subtitles, and a concept where the director is pitching the idea for the video you’re watching. All those things should ooze pretentiousness and yet somehow director Kris Moyes is able to create something quite compelling for the entire duration of the song. This one will certainly be overlooked by most year-end lists but it was one of the videos I thought the most about this year.

I feel like there could have been four different Grant Singer videos on this list. His video for Skrillex’s “Red Lips” is similar to this one, both featuring the bonebreaking dancing of Ringmaster Nugget), but I think it’s more compelling to see these characters dancing in the real world versus a fantastical environment. This video also wins the unexpected moment award, you’ll know it when you see it.

I’d never heard of director Oscar Hudson before this video, and I ended up posting two of his videos in the same week back in November. This one pays homage to Oscar-winner short film “Tango” by Zbigniew Rybczyńsk except in this one all the loops in this video were achieved in camera (and there’s a lot more eggs).

The most original video technique I saw all year. The whole thing was created by simply dragging pre-edited gifs around a desktop screen which I know doesn’t sound exciting. On top of that the thumbnail image of Dawson crying isn’t really motivating anyone to click but I swear this video is more entertaining than it sounds. Apologies to James Van Der Beek.

A montage of women struggling to walk in heels. I’m sure the idea stemmed from those Youtube videos of models falling on the catwalk, but the styling and cinematography take this to another level. Absurd and spectacular.

Alex Takacs aka Young Replicant continues to be one of my favourite directors. You could argue that this is more a short film, as it’s 8 minutes long and features two different songs from Cold Specks’ album, but I think it counts. Stunning cinematography here by Pat Scola.

The Shoes are the only band to appear twice on this list and these two videos couldn’t be more different. Gorgeous visuals in this one. Director Karim Huu Do imagines a couple taking a drug; one losing control of the mind, and the other the body.

We’ve all been there, a dance performance doesn’t go as well as planned and you end up having to dance your way out of a situation with security. One of my favourite pieces of choreography this year, by Tracy Phillips and Dominic Carbone. Loved this one.

Whenever I see AG Rojas name on a video I stop whatever I’m doing and watch. The theme of police brutality showed up in several videos this year, but none were as intense or poetic as this one.

Wench is a collaboration between acclaimed producer Arca and Hood By Air’s Shayne Oliver. The track “Galvanize” is a 15-minute experimental journey sampling everything from Cher to Bone Thugs. This is more video art than music video, but the repetitive visuals are so simple and striking I had to include it.

A timely video, with stunning visuals, raising questions about the perception of refugees. Amazing work by the art department, Sugu Arulpragasam, Tom Manaton, and of course M.I.A as she not only directed the video but edited it as well.

This is the kind of video you can’t unsee; from the opening frame you like you’re in a nightmare. It’s not that it’s scary, it’s just imagery you can feel burrowing deep into your subconscious. Definitely one of the most unnerving and memorable videos of the year.

This one-take video perfectly captures the fun quirky energy throughout the Surf album, which was in my opinion one of the best of the year. Also, Chance’s performance of this song and “Somewhere in Paradise” on SNL was one of the best that show has ever had.

The opening and closing sequences of this dream-like video, directed by Colin Tilley, really do justice to the poetry of Kendrick Lamar’s lyrics. No easy task. Instant classic.

3) Florence & The Machine “What Kind of Man” (Director: Vincent Haycock)

The first chapter in the six-part collaboration between Florence Welch and director Vincent Haycock, and my favourite of the series. When that guitar riff comes in nearly 3 minutes into the video, and the choreography by Ryan Heffington begins, it’s as good as a music video gets.

This is a masterpiece. Ian Pons Jewell solidified himself as a top tier director with this video and the one he followed it with, for NAO’s “Bad Blood”. This video also wins the award for best ending!

I haven’t seen this one mentioned on any year-end lists, let alone picked as the best overall. So what I’m saying is everyone else messed up! This video was created by, and stars, the energetic Instagram sensation Adam Carpenter. Clocking in at over 3 minutes it should have gotten boring at some point and it just never did. This is my favourite video of 2015.