Member Spotlights are an on-going series of interviews with people from our community! You can learn more about becoming a member here. For this instalment we introduce Hawaii-based photographer, Lila Lee.

Jeff Hamada: Are you still shooting with that Contax you had with you that day we first met? That G2.

Lila Lee: Yeah, totally. Love that camera. I always have a smaller point and shoot in my bag so I keep the G2 at home unless it’s something really important. That thing is too expensive to just throw in my bag and have possibly smashed. Knowing my luck, it probably would break in my bag. I’ve already broke 3 XAs and those things are supposedly indestructable.

JH: Was photography a part of your life growing up? When did you first start shooting?

LL: I wish I could say some story like how I started shooting with an old camera that was handed down from my great grandfather, but I actually didn’t take a photography class till I was in college. I was going to Santa Monica College originally for drawing and painting, and to get my GE classes done with to try to transfer to Art Center. But yeah, I just had an extra elective and decided photography might be cool to try. I actually ended up getting accepted into Art Center as an illustration major but ended up applying to the photography department one term later. I have to admit, I have no idea how they let me transfer because my photos were so terrible back then! 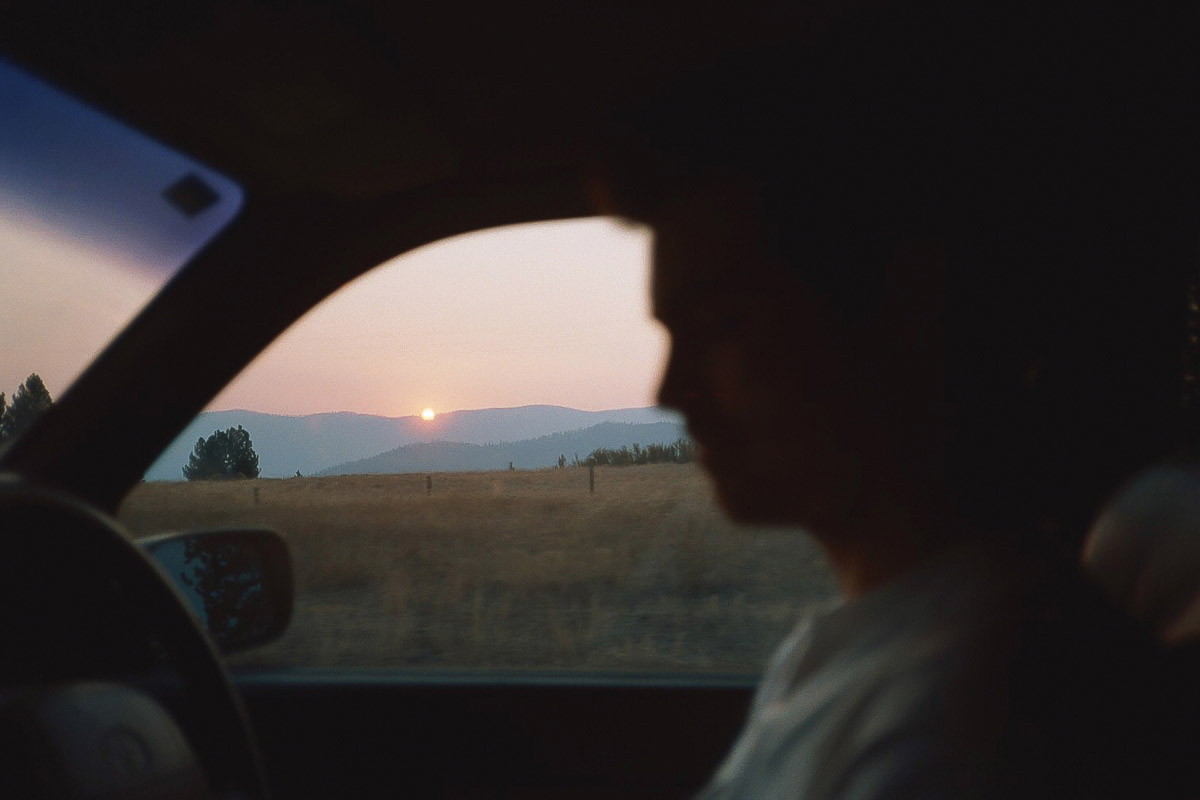 JH: If you had to pick three major influences on you artistically—things that really shaped you—what would they be?

LL: Well, I guess the first time I remember seeing something and thinking, “Wow, what is this? I wanna learn everything about this”, was in the 9th grade. I went to Tower Records and saw a magazine called “It Burns.” I remember it was a horizontal magazine instead of vertical like all the other ones, filled with all this awesome graffiti. I had made friends with D, who I’m still friends with to this day, and he was a big influence in my life early on. Super good at drawing, showed me tunnels in Hawaii, where I saw my first ever Katch piece, and showed me artists like DAIM. Made me want to learn how to draw in 3D so bad! I was kind of a nerd and had a 12oz prophet account. That was a really long time ago though… Wish Tower Records was still around.

Uhhh… second thing that’s influenced me artistically is probably listening to Radiohead by myself at 2 in the morning. I don’t know why but I used to listen to Motion Picture Soundtrack on repeat and draw by myself for hours. Something about feeling sad made me want to be alone and draw. They went hand in hand for me and I guess I couldn’t really sit still long enough when I was happy. Maybe that’s why I changed majors. Haha! And weed. Weed helped me come up with a lot of my projects during school.

JH: DAIM made me wanna draw in 3D too! I remember staring at a drawing of a wasp that was also a word, for hours. And Kid A is probably my favourite album of all time. I tripped out when I found that hidden booklet behind the CD tray. 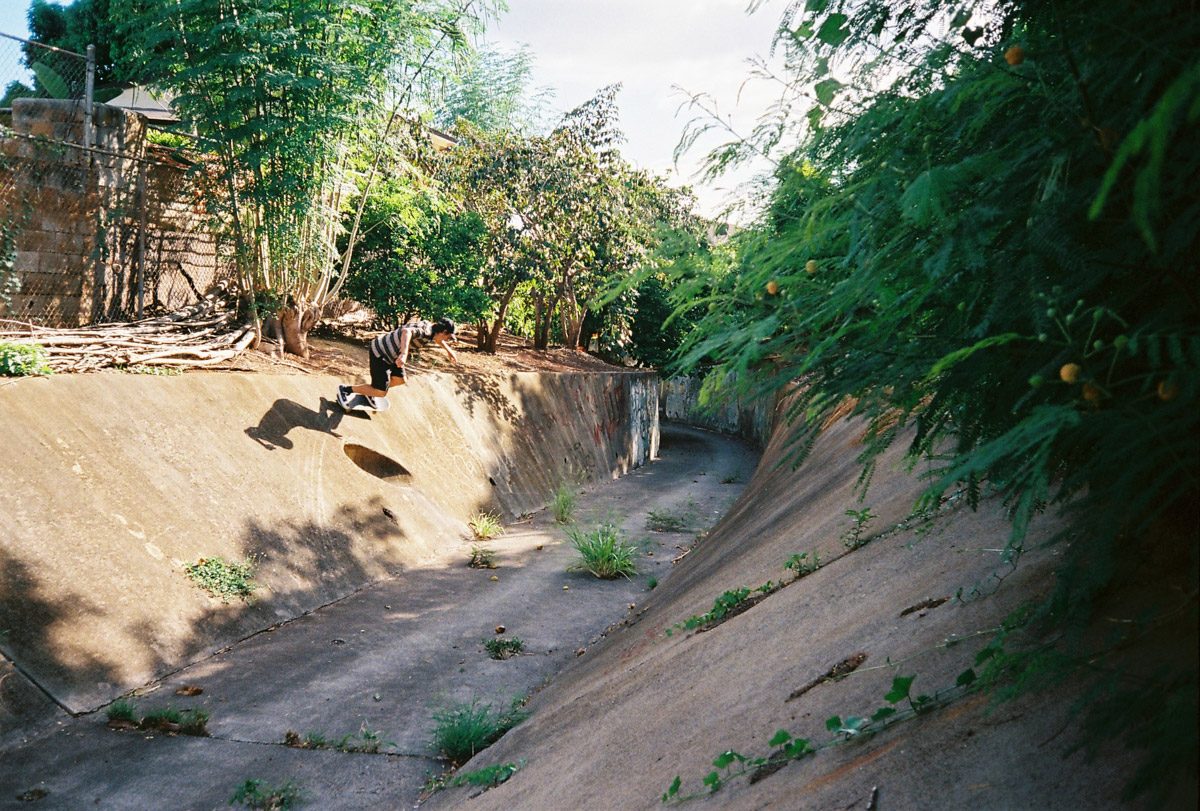 JH: How did your perspective of Hawaii change after living elsewhere for a decade?

LL: I think it made me appreciate Hawaii so much more. When you’re born on a beautiful island and that’s all you grow up knowing, you really have no idea how good you have it. I used to see commercials for Olive Garden and be so bummed we didn’t have one. One of my biggest disappointment after moving to LA was finding out how terrible Olive Garden really was! I didn’t have any plans on moving back to Hawaii, but I was living in Beijing for about a year when I got into a moped accident and had to have reconstructive ACL surgery. My insurance wouldn’t cover it unless I did it back home, so I came back thinking I would leave after I got better. But, that didn’t end up happening. I made some really great friends, met the love of my life (skateboarding), and Dana. Just kidding, Dana! But seriously, all of those factors and being closer to my parents, really made it impossible to leave again. Hawaii is a really special place, with beautiful beaches and hikes five minutes away, bomb food, and kind people. I’m so happy I stayed and am so glad I got into that moped accident!

JH: Would you do it again, though? Live somewhere else?

LL: Yea, if the opportunity came. I think it’s important to live in different places to experience different things.

JH: Who is inspiring you on Instagram these days? Can you give me your top 5 right now?

LL: I follow this one called CultofTom that’s awesome. It’s all clips of Tom Penny skating. That’s really inspiring but makes it hard to want to stay home and have to work after! Jef Hartsel because besides the fact that he rips, he makes rad art, gives history lessons and I love watching his son Nainoa skate. I’m like “fuuuck, he just learned how to 5-0 grind that thing? Ok, I have to try that” haha! Sorry this interview is becoming more about skating than art. I mean, skating is art too, but yeah. Can I just list two Instagrams? Can’t really think of any others that really make me feel inspired. Instagram is so fast, I feel like you look at something for like half a second and don’t even remember it afterwards. Going on hikes or looking up at the sun while I’m under water inspire me. Nature really is the root of all inspiration. 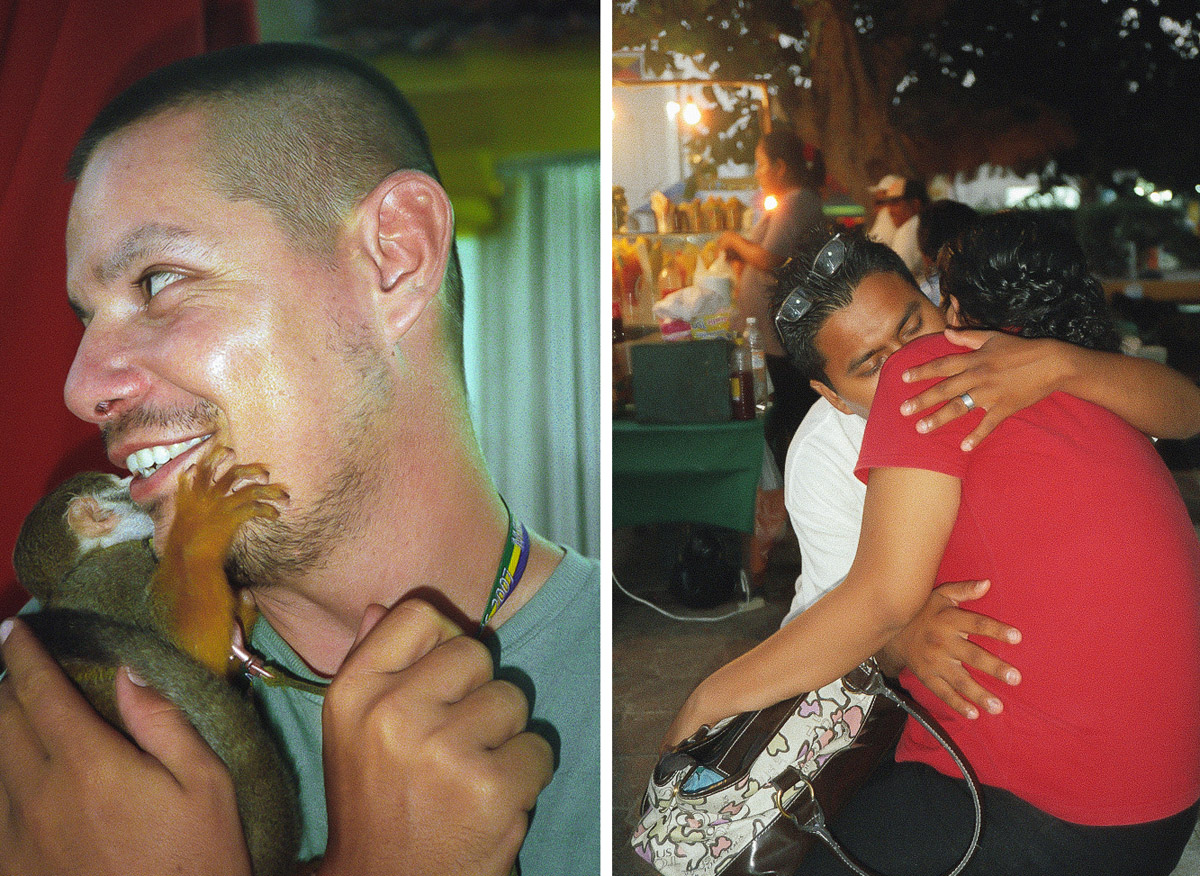 JH: Is there a story behind your old Insta name @DirtNaps?

LL: Haha, uhh… I didn’t really give it a lot of thought when I chose it. When I moved away from LA, I was going thru a break up and deleted my old instagram. When I realized it was the only way to get in contact with some of my friends, I made a new one and… I don’t know, I like camping.

JH: I love the skateboarding videos you post, they’re all massively inspiring to watch someone learn something new. I think it’s interesting that most people stop trying to learn new things at a certain point and it’s just really cool to see someone going at something really fearlessly. Can you talk about that at all? Has skateboarding changed your life?

LL: Oh man, skateboarding was one of the best things to happen in my life. I only wish it happened sooner! It has definitely changed my life. I’m constantly learning something new whether it be about a trick or about myself. Skating’s taught me patience, perseverance, confidence, and so much more.

Jef and Dana have both mentioned before visualizing and manifesting. Something that honestly, when I first heard I thought sounded kinda hippy cheesy, but it couldn’t have been more TRUE. If you can’t imagine yourself landing a trick, you’ll hesitate and probably end up eating shit. Same with life; if you can’t see yourself accomplishing something, you’ll never really give it your all because you’re already going in with doubt. And also, skateboarding is one of the only things where you’ll see all kinds of weirdos hanging out all together. and I mean, like sometimes really weird. Everyone’s accepted because the bond of the board. Life is never boring when you have a skateboard.

And thanks for thinking my videos are inspiring, that means a lot. I felt really self conscious when I first started because I was already so late to the game and I didn’t want people thinking I was on some skate date or something. But, fuck it because better late than never and skate dates are awesome!!! 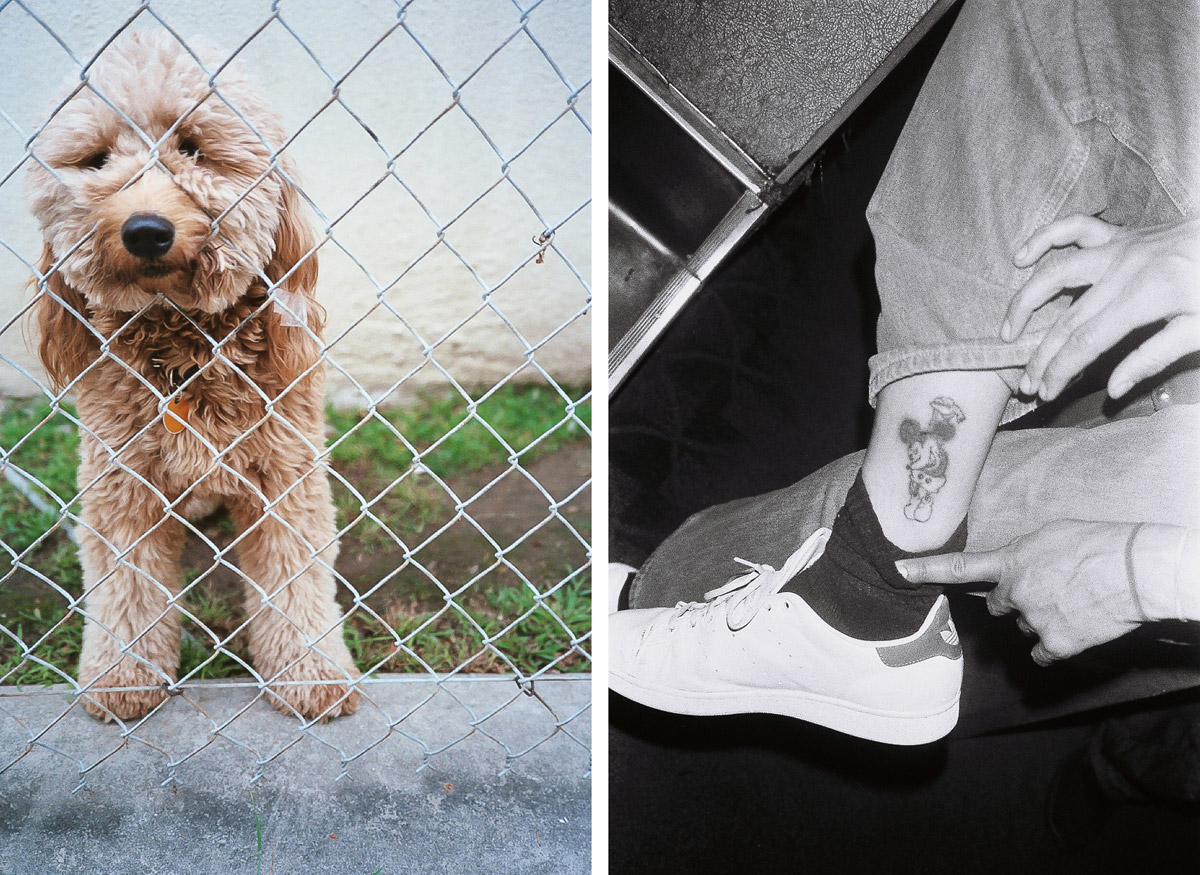 JH: What’s your favourite album to listen to while you edit photos?

LL: I like listening to podcasts or audio books while I edit. There’s so much to learn and so little time! Radiolab is my favorite.

JH: Is photography your calling or just something you’re doing for the time being?

JH: What’s one thing you want to accomplish this year? And what about in your lifetime?

LL: Oh jeez, well my new year’s resolution was to hustle more and learn how to kickflip. In my lifetime? It would be cool to be able to pay off my parents’ mortgage and see the aurora borealis. 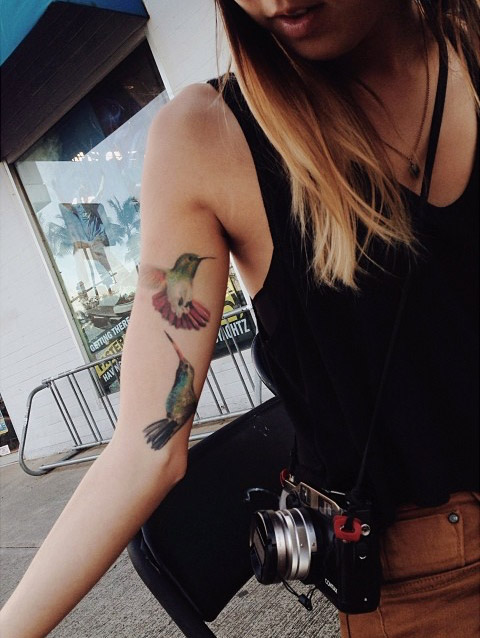