This is the first of six mini interviews, featuring the artists in our Tangents art show. First up is Ben Tour! 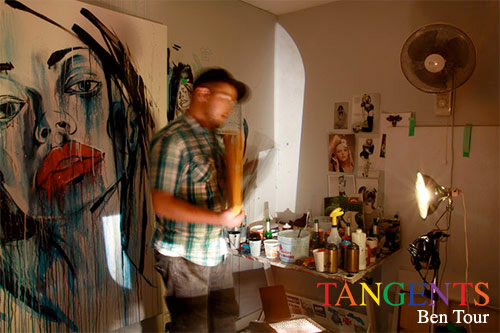 Can you describe your process? And are the little letters that appear in some of the works from those rub/transfer sheets?

My process changes from piece to piece. With painting, I start with a sketch which is quite tight and then project it on my chosen surface with an overhead projector. I’ve played around with different techniques but find this one the easiest. For smaller scale work, I just sit down and get to work usually building the final from smaller roughs. Tradititional illustrator style. The little letters and numbers are rub-on. It’s a product that was popular for designers before computers.

My Dad actually introduced me to it as he would lay out magazines cut and paste style and have sheets of Letraset Rub-On next to the drafting table. I also remember as a kid their was similar stuff in boxes of Fruit Loops – you would get a little rub-on sheet with Toucan Sam and you could use a pencil and rub him onto paper. I’d forgotten all about the stuff and then by chance years later found a box of it, which I still have.

I totally remember those rub-on sheets in the cereal boxes! When you were a kid did you ever read those books that came with a battery-powered “pen” that had some sort of laser in it and when you put it on different colors in the book it would make different noises and light up? (This sounds totally made up, but I swear this was actually a thing!)

I don’t remember those? Sounds awesome. My parents only got the good kid cereal maybe once a month, I ate alot of Shredded Wheat and Weetabix. I like both of those cereals but they never had cool toys. 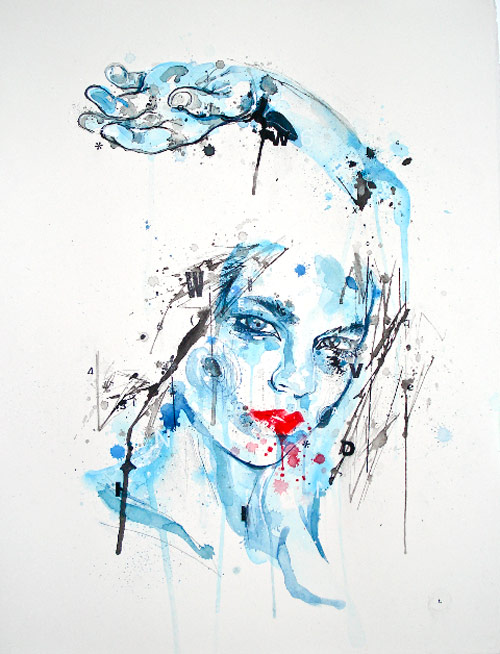 I notice on your site you describe yourself as a painter and an illustrator, do you think there are negative connotations that come from being labeled an illustrator?

No. But I understand what you mean. Illustration by definition is visual matter used to clarify or decorate text. It’s a structured job, and I think because of that it doesn’t always get the respect it deserves. Fine artists have always borrowed from illustrators and vice versa. My favourite artists have always been illustrators and comic book artists. What I try to do now is bend and borrow illustration techniques and conceptual process to showcase it as fine art.

Who was your favourite comic book artist growing up? And what about now?

I had a lot of faves growing up and as I got older my taste changed and developed. My first comic book love affair was Uncanny X-Men, I started around 211, which I got as a Halloween present while Trick or Treating. After that it was over. Mark Silvestri, Jim Lee. I tried to beg, borrow and steal as many Marvel comics as I could. Frank Miller, Ron Lim, Arthur Adams, Todd McFarlane, Sam Kieth. Mike Mignola, Walter Simonson. Then Havoc/Wolverine ‘Meltdown’ came out – it was a mini series of graphic novels painted by John J. Muth and Kent Williams. It was different than anything I had  seen before and made me interested in painting as the art was so raw and ‘Drippy(?)’.

After that I discovered ‘The Beguiling’ which is an amazing comic book store in Toronto, I got heavy into into ‘alternative’ comics and stuff like ‘Love & Rockets’ and ‘Ed the Happy Clown’. I was big into Moebius, Bill Sienkiewicz and Heavy Metal. Nowadays I’m more into guys like James Jean and Ashley Wood. I’ve skimming the surface on this topic. I’m a fucking dork.

Yeah I was really into Silvestri and Jim Lee, X-men, WildC.A.T.S., Cyberforce. And Sienkiewicz is one of my favourites, Elektra Assassin and his Jimi Hendrix book are amazing. Are the figures in your work based on people you know?

I use alot of photography in my art and sometimes I get friends to pose for portraits. Many of the references I use are found images.

Fun? I’m pretty busy these days to be honest. I hang out with my family, I go to the beach or on hikes. I’m a dad so i usually do fun stuff with my son. He keeps me out of trouble. I think its commonly referred to as getting old.

This website is the closest thing I have to a child (insert sad music). Are there any good kids shows on tv? And what about the computer, is he on there a lot? I think it’s weird that kids are all learning how to type on a keyboard when I was just drawing or playing with lego at that age.

My kid is still really young, but I don’t underestimate how much he absorbs through TV and the computer. He’s not really into TV at the moment and that’s a good thing. I did check this out with him.

I was gonna say that Yo Gabba Gabba looked like the only show I’d have my kid watching! Do you want to end the interview with a quote?

If you are in Vancouver on November 13th, come out to Tangents and meet Ben in person!

Join the Facebook Event, and tell everyone you know! 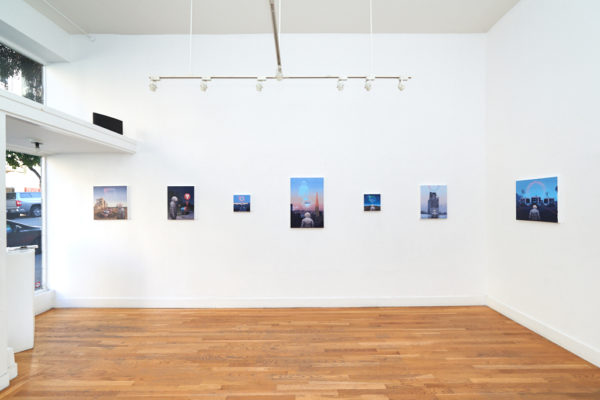 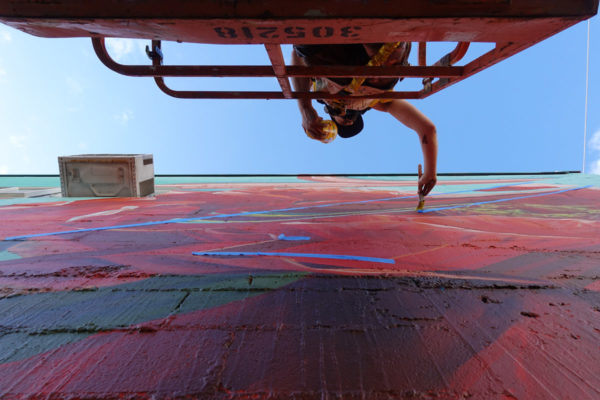