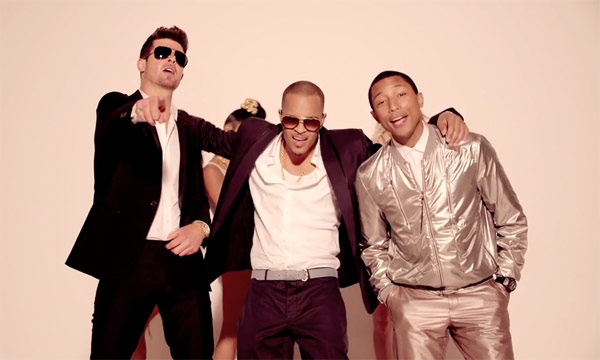 According to The Guardian, Robin Thicke and Pharrell Williams have been ordered to pay $7.4 million to Marvin Gaye’s children for copying the late singer’s song “Got to Give It Up”, for their song “Blurred Lines”.

There are so many opportunities here for bad puns based on the two song titles, but all joking aside, this is actually pretty crazy. If you listen to both songs, it’s obvious that Robin Thicke and Pharrell were inspired by Marvin Gaye and that era, but I fail to see (hear) the plagiarism. What parts did they steal? The lyrics are different, the chord progression is different; I don’t understand the ruling.

I do think Robin Thicke is a spineless hack. He claimed he wrote “Blurred Lines” before the lawsuit, and then quickly threw Pharrell under the bus, claiming Pharrell penned the whole thing while he was drunk and high. He is talentless and slimey, but none of that changes the fact that these two songs are different. Marvin Gaye’s children do not deserve anything in this particular case.

If this goes through it’s setting a pretty scary precedent. I’ve embedded both songs below so you can compare the two. I honestly can’t figure out how they came to this decision.