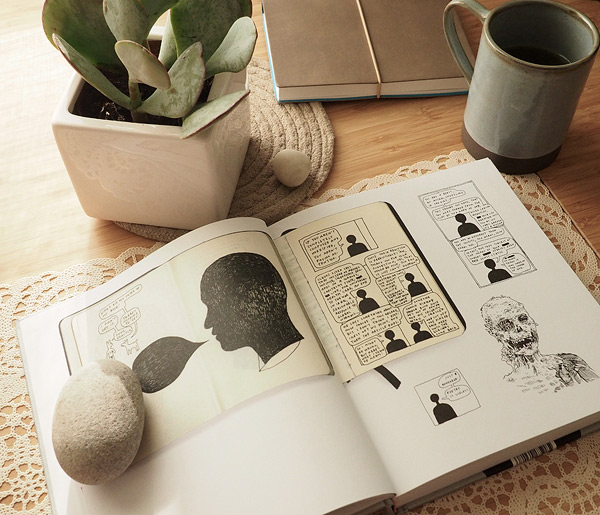 “What does it feel like being you?” is a question Poetry Is Useless both asks and addresses, offering a unique meditation on the very idea of uselessness and self-reflection. That’s not to say there isn’t also a whole lot of fun/poking fun!

See more images and our interview with Nilsen below. Also enter for a chance to get your very own copy of Poetry Is Useless by sharing your favourite poem in the comments section below. We have two copies to give away! 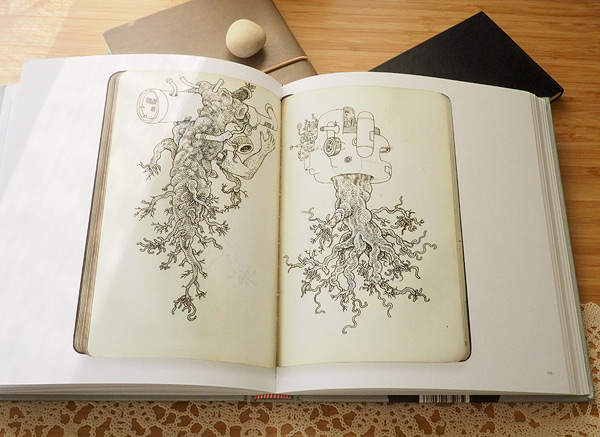 A personal compilation of everything from simple doodles to elaborate sketches, philosophical musings and personal anecdotes from 7 years worth of journals, Anders Nilsen’s latest is a continuation of the highly personal and persistently humorous style developed through previous, award-winning works like the graphic memoir, Don’t Go Where I Can’t Follow (2007), and his 2011 magnum opus, Big Questions.

Booooooom: You were born in New Hampshire, lived in Minneapolis, and are currently based in Chicago. What makes Chicago a great place to live and work? Are there places you feel more creative or inspired?

Anders Nilsen: I actually moved back to Minneapolis in 2012, so I’m no longer in Chicago. Most of the things that made Chicago great for me were my friends there: Nick and Nadine at Sonnenzimmer, the photographer Todd Baxter, cartoonist and animator Lilli Carre… there are many more, but the fact that some of the most astonishing artists I know of are also really good people seems remarkable to me. I would also put Jason Hammel at Lula Cafe in that category. I cooked under him for years and still work with Lula curating the art. And Lula is a sort of second home for me when I’m in town. I’m leaving a lot of people out.

B: I’m really interested in how people work, especially the little routines they create for themselves. Would you mind describing your typical day? Or even just a day (any), if you’re not the type to have a typical one.

AN: I get up sort of latish, like 9 or 9:30 usually. I linger over breakfast and read the news. I figure since I don’t have a commute, and I set my own hours I get to indulge in eating well, and not rush myself. So I do some work in the morning, take a longish lunch, then work the rest of the day, until 11 or 12 in the evening. Sometimes I go skateboarding in there somewhere. I’ve heard Benjamin Franklin had to be naked to write well. Or sit in a bathtub or something. I’m sorry to say my routines are not that special. 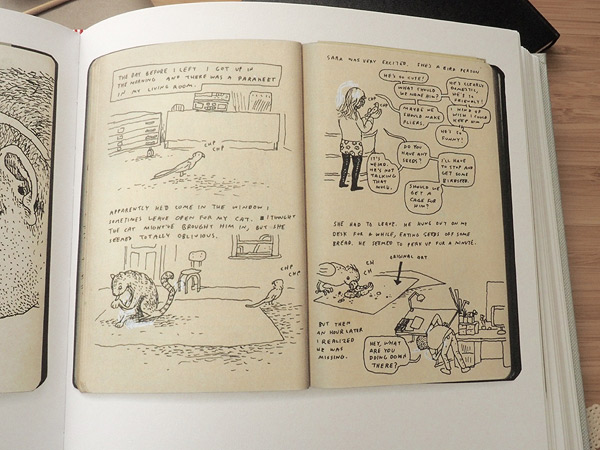 B: You experiment a lot with narrative form in ways that feel somewhat un-categorizable, how would you describe your own work? Do you consider yourself a graphic novelist? Comic artist? Storyteller? Poet? All of the above? None?

AN: Un-categorizable… I like that characterization. I guess that’s what I’m going for. When I was younger I spent a lot of time thinking about the idea that as an artist one should never know exactly what one is doing. If you already know what you’re doing before you do it you are on the wrong track. You should be doing your best to surprise yourself. Any of those categories you mention fits some aspect of what I do, but none encompasses all of it. I think of myself as an artist, and almost always as a storyteller.

B: I love the title of your book, especially the way you play with the whole idea of uselessness–almost regarding it with a completely different kind of appreciation. But I guess, useless or not, what do you like about poetry? What about it appeals to you?

AN: I don’t read a lot of poetry, honestly. But great poetry acknowledges that meaning is harder pin down than we like to think. That individual words that seem solid and simple actually have a more or less amorphous cloud of meanings that can be played with and cut up. The more solid thing about words is the weird noises we make to articulate them. As you seem to say, ‘useless’ has a hazy cloud of meanings around it just like any other word.

B: Do you have a favourite poem or poet?

AN: The only poem I ever memorized was the Jabberwocky by Lewis Carroll. So obviously I’m not very serious about poetry. That’s a great example, though, because he makes complete nonsense words feel very palpably meaningful, so it’s almost doing the opposite of a normal poem in some way. 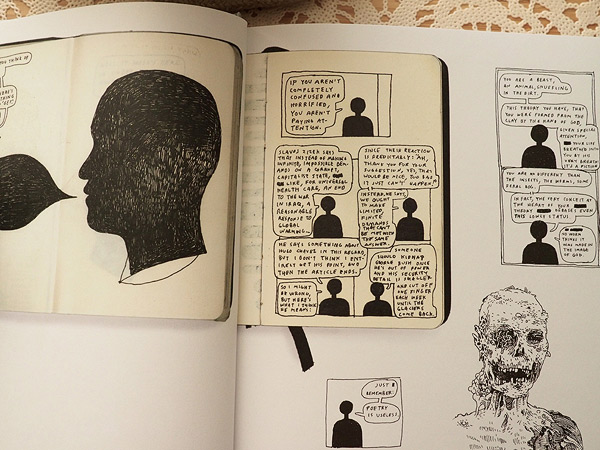 B: You deal with some pretty heavy ideas. At one point you even get into Slavoj Zizek’s critique of Marxist critiques of capitalism, only to confess that his argument doesn’t make much sense to you. How conscious are you of your audience and being understood by them when you’re in the creative process? Or is how your work’s received something you only think about after the fact, i.e. when it comes to going back over 7 years of journals and deciding what to include or not?

AN: The Zizek quote was more specifically about how to respond to Bush and the war in Iraq, and he was saying there has to be actual consequences for the people in power, or otherwise they will just do what they want. Entirely peaceful protest is not enough. Which I basically agree with. I definitely don’t want to get too far ahead of my audience, or be obscure, but I also believe in speaking to your readers ever so slightly above their capacity. I believe in challenging people a bit and getting an audience to stretch. Art and literature is always more exhilarating when you have that moment of revelation and you feel like you are discovering something. And anyway, I’m trying to stretch myself a bit, too, so why not bring them along for the ride? 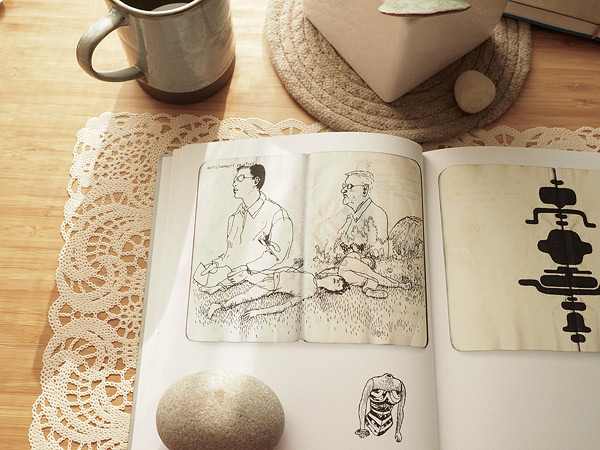 B: Maybe because so much of your stuff is autobiographical or diary-esque it feels very intimate. Are there things you consider too personal? Or that, looking back, you ever felt a kind of belated self-consciousness about having shared?

AN: Sure, I think two of my books in particular are definitely too personal. I didn’t think that when I decided to publish them, so I guess I sort of tricked myself. And, whatever, being overly personal is a bit impolite, but a lot of good art is impolite. It made me a little uncomfortable for a while to have Don’t Go out in the world, but that book seems to matter to some people, which means something to me, in turn. And doing that work changed the way I think about art making and storytelling. The book can be for them, and people who get squicked out, can just leave it on the shelf. Not every book has to be for every person. 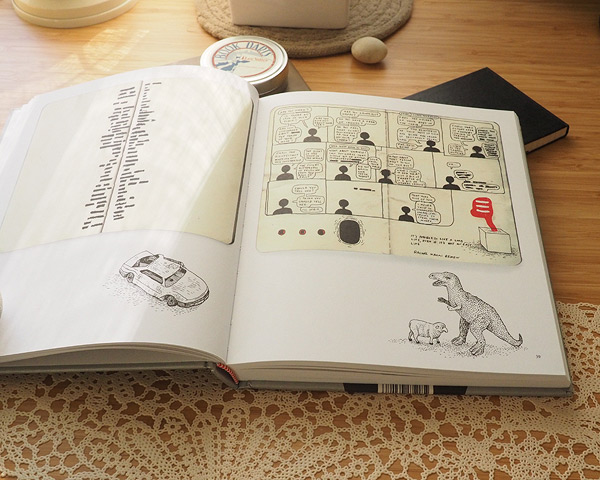 B: Can you talk a little bit about mistakes? Particularly your choice to include blacked-out and whited-out moments so consistently (and sometimes, what feels like, emphatically)? Why is this important to you? Or is it even? (Am I reading too much into it?)

AN: Part of the experience of looking at an artist’s sketchbook is feeling like you are getting a glimpse into the mind and thinking process of the artist, and seeing the process represented on the page. And mistakes and accidents and the ways I play with them are definitely part of my approach to my sketchbook.

B: How do you see this latest book in relation to your other collections/graphic novels? Do you feel like you approach things differently now than you did before?

AN: I was actually working on this material for the last seven years, so it was concurrent with my work on Big Questions and Rage of Poseidon, and actually much of Rage, started as pieces in my sketchbook. So it doesn’t represent a ‘change’ in my approach, just one other way I work. I’m still working in sketchbooks and working on a more traditional style graphic novel, too, so I always have a few different things going on. But I do feel like this book is the most uniquely mine, in a way. I feel like this is the closest I’ve ever gotten to doing something that hasn’t really been done before. 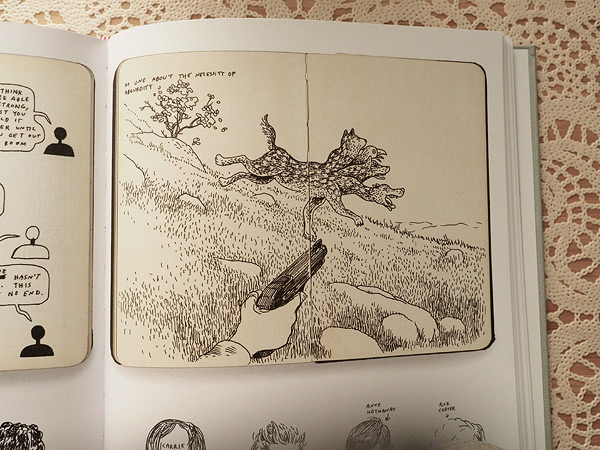 B: Your work has a very particular, slightly-dry humour to it. What was the last thing that made you laugh really hard? Like the kind of laughing where everything hurts.

AN: That would be going on book tour with Marc Bell a few weeks ago. Some of the time he would just be staring out the window, but when he gets going he’s like the funniest stand-up I’ve ever seen. He does voices and absurdist repetition of nonsensical in-jokes that just kill me. That guy is brilliant on so many levels.

B: Jeff was recently giving away free encouragement on Booooooom. You also tend to do little exercises–telling people to breathe or imagine things with you. Do you have any advice or “free encouragement” for Booooooom readers?

AN: Take a deep breath. Regularly.

B: What is the best piece of advice or encouragement you’ve ever received?

AN: For the last week I’ve been part of this artists residency in Minneapolis called PFC, and it’s been amazing. Everyone walking around the whole time expressing wonder and amazement at how crazy talented each other are, and how lucky we all are to be there and get to spend time together. Simultaneously humbling and encouraging all at once. So: surround yourself with amazingly talented, good-hearted people. 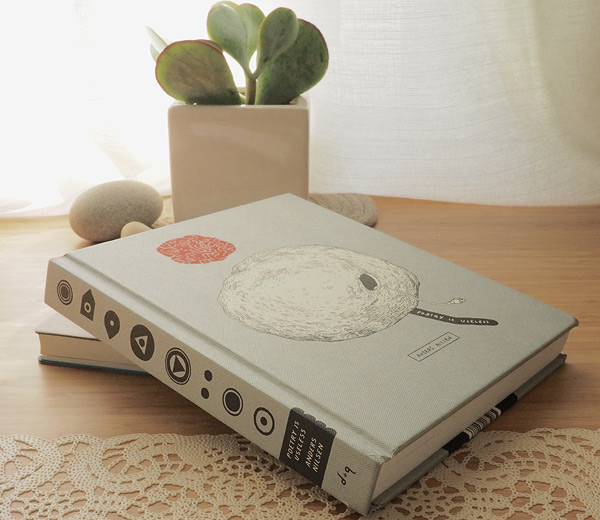